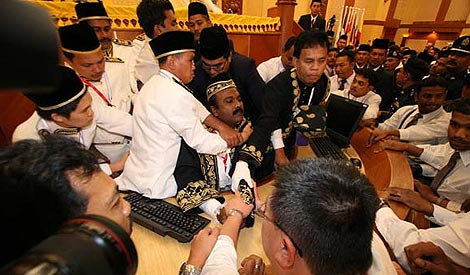 MP SPEAKS | The culture of accepting crossovers, be it from Umno or any other party, is abhorrent and a betrayal of the mandate given to Pakatan Harapan by the rakyat in GE14 and must be stopped.

DAP national chairperson and Cheras MP Tan Kok Wai ought to be commended for speaking out against such a practice even though he has come under fire from some of his own coalition members for not discussing the matter first at the Harapan presidential council meeting this Saturday.

What is there to discuss?

When Umno was high and mighty not too long ago, there was a general consensus amongst the then opposition that it was a plague to the nation and was to blame for its woes.

When Umno was untouchable, they ridiculed the then opposition and threatened us with the might of the law to the point our current prime minister was subjected to the humiliation of being labeled a traitor to its cause and by extension, a threat to the future of Malaysia.

Even his wife was not spared and had to endure the ignominy of police interrogation for having done nothing wrong.

It is safe to say that if Umno had won, many of us in government today would be prosecuted and the country would be bankrupt in no time.

No doubt, it might be said that not all in Umno are like that, only its leaders.

But what did the rest of its members and MPs do when their leaders ran riot? Not a hint of protest or objection.

And today there is talk that up to 40 Umno members might cross over?

Have we not learned from what happened in Perak in 2008?

Didn’t we shake our heads in disgust at the sight of the then Pakatan Rakyat speaker of the state assembly there being forcibly removed from his seat (photo) due to the conduct of three state assemblypersons who crossed over, effectively handing the state back to Barisan Nasional?

These so-called Umno 40 did nothing to stop the rot of the country when they were in power despite probably knowing all along that their leaders were running it down to the ground.

And today we want to accept them?

Accepting crossovers, especially from Umno, gives the impression that there is a dearth of talent in Harapan and that we are desperate to fill that void even if it means accepting those who willingly collaborated with a corrupt regime that had little, if any interest in the wellbeing of Malaysians.

Or perhaps it’s a numbers game in that there is a need to boost our membership to appeal to the masses in order to enhance our chances of retaining Putrajaya in GE15 or to consolidate our power in Parliament.

I do not wish to speculate but what is certain is accepting Umno crossovers into Harapan now is one way of losing Putrajaya in GE15.

Politicians will have their own reasons for encouraging cross overs to suit their agenda but the ordinary Joe on the street would certainly be wondering what hit him if Harapan looks like Umno in a few months, as that wasn’t what he signed up for.

We have nearly five years ahead of us before GE15 to gather talent, the likes of which this country has not seen in a long time, and a real opportunity to heal the trauma inflicted from 60 years of Umno and BN rule - not to go back to that mess by doing the same it did in different clothes.

Save for a few who have yet to see the light, nobody wants an Umno 2.0 today.

Surely, there are more important things to talk about.