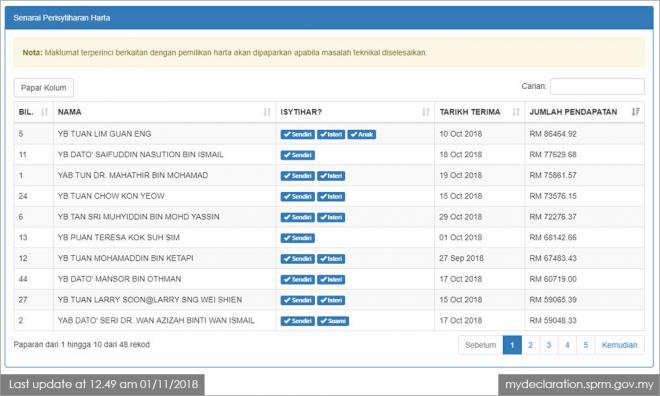 MACC has published details of the incomes of Pakatan Harapan and Parti Warisan Sabah lawmakers on its website.

The commission said it would update the information with regard to its asset declarations once technical problems are resolved.

MACC deputy chief commissioner (Prevention) Shamsun Baharin also clarified with Malaysiakini that the figures stated are that of the lawmakers' monthly income and not their joint family income.

An update this evening shows Works Minister Baru Bian as having an income of RM108,056 which would make him number one. Baru, however, told Malaysiakini that he overdeclared and is rectifying the matter.

“I can't beat Lim Guan Eng. The real amount should be much lower, RM78,000 around there,” he had told Malaysiakini. If this is the case, Baru will be the second highest earning lawmaker after Lim.

For Lim, the website stated that his wife and children have also declared their assets. Whereas for Mahathir, only his wife Dr Siti Hasmah Ali has declared.

Mahathir's son Mukhriz, who is also the Kedah menteri besar, is among the 77 Harapan MPs yet to declare their assets.

Meanwhile, Deputy Prime Minister Dr Wan Azizah Wan Ismail is in the ninth spot with a monthly income of RM59,048.33. It states that her declaration also includes that of her husband, PKR president-elect Anwar Ibrahim.

The couple's daughter Nurul Izzah is not on the list.

Based on past cabinet salary figures and the 10 percent pay cut Mahathir announced early in his administration, the prime minister pulls in an estimated monthly salary of RM20,543.99.

The website contains 80 names as of 5.50pm. There are no details for one name on the list – Minister in the Prime Minister's Department P Waythamoorthy.

The website currently lists 35 out of 49 lawmakers with government posts as having declared their assets.

Malaysiakini understands that some of them have already declared their assets to MACC but their names have not yet been included in the list.