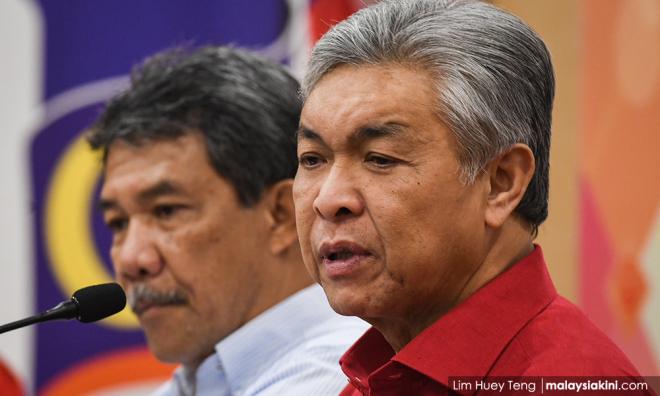 Umno, in anticipation of a by-election for the Rantau state seat, today launched its election machinery for the constituency.

Its president Ahmad Zahid Hamidi said although no ruling had been made by the court on the election petition for the Rantau seat, the election machinery was launched to keep its members prepared.

He said it was also to ensure smooth going of party activities at the grassroots level.

“Moreover, generally all those present here are grassroots members from Rembau, so the launching of the election machinery today is timely,” he told reporters after an event with the Umno president for local party members, today.

Mohamad is the incumbent Rantau assemblyperson.

Mohamad won the seat unopposed after the Election Commission's (EC) returning officer Amino Agus allegedly refused to allow Streram into the nomination centre on April 28 on the grounds that he did not have a valid pass issued by the EC.

However, Streram claimed that the EC failed to inform him about the pass when obtaining the nomination papers and paying the deposit as a candidate.

Streram is seeking to void the Rantau election results on the ground that Mohamad had not won it legitimately.

Earlier, Ahmad Zahid in his speech, said he would be spending time in Rantau to assist Mohamad in the event of a by-election in the constituency.

On another development, he said Khairy who is BN's shadow finance minister, will raise the opposition's alternative Budget 2019 in the Dewan Rakyat next Monday when he debates the Budget 2019.

Meanwhile, Mohamad said the court might decide on the election petition for the Rantau seat next week.

“If there is no by-election, Alhamdulillah, but our machinery will still be activated for Umno to rise again and I believe Umno will rise again, starting in Negeri Sembilan,” he added.