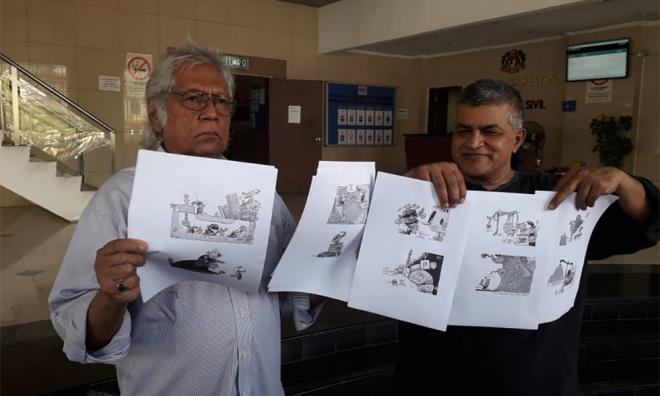 Cartoonist Zulkiflee Anwar Alhaque, better known as Zunar, has filed a suit against the police for seizing 10 of his artworks during an exhibition in Penang back in 2016.

In his statement of claim, Zunar is seeking the return of the pieces, RM380,000 in compensation and a public apology from the police.

Zunar named senior CID investigator Rusli Tipu of the Timur Laut district police headquarters in Penang, the inspector-general of police and the government as respondents.

The raid took place at the ICT Mall in Komtar, Penang, where Zunar was an invited exhibitor at the Georgetown Literary Festival 2016.

Most of his artworks involved were lampooning then prime minister Najib Abdul Razak and his wife Rosmah Mansor.

In his statement of claim, Zunar said the disruption by the police had caused him pain, suffering, embarrassment and loss of income.

"The plaintiff states that the said actions of the defendants were vindictive and without any just cause or reason.

"Further, the target and subject matter of the plaintiff's seized artworks have been fully exposed and justified since the raid," read Zunar's filing.

A group of Penang Umno Youth members had attacked Zunar and his exhibition prior to the raid. No action was taken against them.

Soon after the attack, the police took away Zunar's artworks and arrested him.

He had demanded that the police return his artworks multiple times.

Zunar's suit was filed today in Penang. He was represented by Cecil Rajendra.