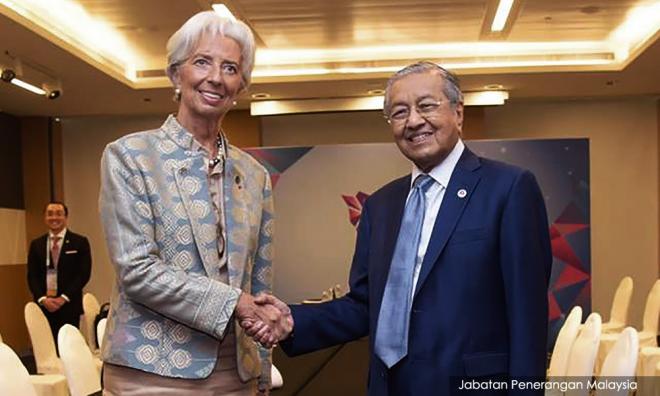 The government is mulling with the idea of cryptocurrency, especially on the role it might replace, Prime Minister Dr Mahathir Mohamad said.

"It is her opinion. (But) We are starting it, anyway," he said when asked about International Monetary Fund chief Christine Lagarde's remarks on the possibility of central banks around the world considering issuing digital currency.

Various central banks around the world are seriously considering the ideas, including Canada, China, Sweden, and Uruguay.

On Harapan Coin, Mahathir said it was not given much thought yet.

"We may accept it.. but depends on how well it functions," he said.

Asked if Bank Negara Malaysia (BNM) would agree to it, he said: "I haven't spoken to BNM.”

Cryptocurrency or digital currency is not a legal tender in Malaysia.

Mahathir went on to say that more interesting than cryptocurrency was cashless society.

"More interesting is cashless society of India. They hardly use any money.

“When money is not used, corruption is less possible," he said, adding that he had spoken to Indian Prime Minister Narendra Modi about it.

Mahathir also said that he did put forward the idea of a common East Asian Currency, but only for trading purposes and not for domestic use during the Asean Plus Three (China, Japan and South Korea) Summit.

"This is an old idea of mine. I mentioned we should have an East Asian Currency only for trading, not for domestic use.

"That was an old proposal of mine. I thought that this (is) something (that) would enable even foreign countries to handle problems of not having enough foreign exchange," he said.

On the US-China trade war issue, he said Asean countries were concerned about it.

“China itself is not keen on the trade war (as) it felt it was not contributing to the development of peace in the region,” he said when asked if the issue was discussed during the meetings of the just concluded 33th Asean Summit and related meetings.