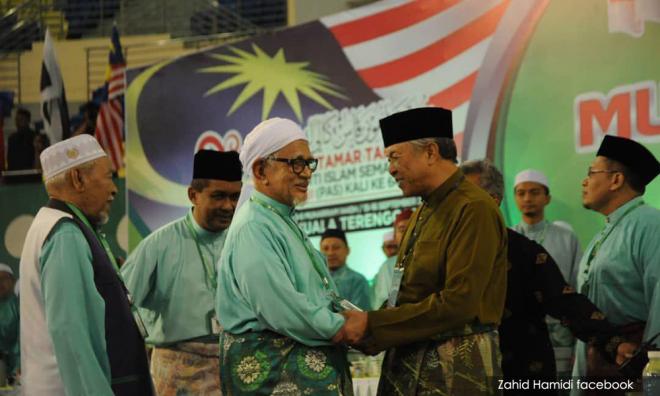 Did Umno, BN sign off on Zahid's proposed PAS merger?

MP SPEAKS | Umno president Ahmad Zahid Hamidi must be credited with making the most astounding announcement in the six months since Malaysians created history toppling Najib Abdul Razak and the six-decade rule of Umno-BN in a democratic transition of power.

This is his proposal at the joint Umno-PAS rally in Pasir Salak last night openly calling for a merger “in the name of Islam, Malays, Malaysia and bumiputera."

Two months ago, Zahid assured Malaysians that the cooperation between Umno and PAS was not leading towards the formation of a new coalition, but rather was just collaboration between two parties to strengthen their roles in the opposition camp.

There is now a quantum jump in Zahid’s political thinking, where an informal cooperation for the opposition’s sake has now skyrocketed into a merger between the two parties.

But two questions need to be clarified first:

First, did Zahid get a mandate from various Umno levels – the supreme council, elected representatives, the Youth, Wanita and Puteri wings, and the general assembly? Did he get a mandate from other Barisan Nasional parties like MCA and MIC for the proposal of a merger between Umno and PAS?

Or did Zahid unilaterally and without extensive discussion with other Umno and BN leaders made the proposal for a merger last night?

Secondly, is PAS reciprocating to the Umno overture for the merger?

At the joint rally, PAS President Abdul Hadi Awang, who spoke after Zahid, made no mention of the proposal.

It would appear that Zahid has lost confidence in his ability to lead Umno to regain power, despite Umno leaders initially believing that the four-party Pakatan Harapan coalition would implode and disintegrate within two years of forming the government.

Now, even Umno leaders are wondering whether they can regain Putrajaya in the 15th general election before May 2013, and whether they should prepare for a longer stint in the political wilderness.

Hence the desperate cry to PAS to help to keep Umno alive made by Zahid yesterday.

Zahid’s proposal is extraordinary, for in the normal course of events, any proposal for a merger would come from the smaller party, but here the bigger party Umno is suggesting the merger.

Although the number of Umno parliamentary seats have been reduced from 54 to 48, Zahid has clearly lost confidence in his ability to restore government power to Umno without the merger.

It is most unfortunate that in the foreseeable future, the country is going to be trapped in the toxic politics of fear and hatred, based on irrational and baseless politics of race and religion, seeking to polarise and divide Malaysians along racial and religious differences, instead of an overarching, unifying and inclusive politics to seek the betterment of lives of all Malaysians, regardless of race or religion.

But I believe that these merchants of fear and hate, who exploit the irresponsible politics of race and religion, are fighting a losing battle for the majority of Malaysians.

In this age of information, most Malaysians would want a 'New Malaysia' which promotes the welfare of all Malaysians regardless of race and religion to succeed, and for Malaysia to take her rightful place as a successful, united, just, democratic, ethical, progressive and prosperous nation in the international arena.