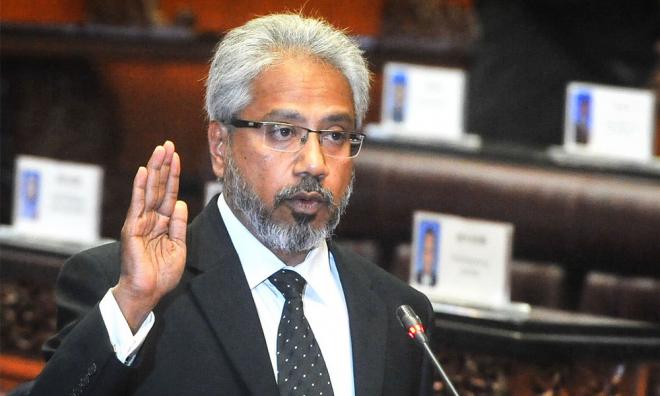 Minister in the Prime Minister's Department P Waythamoorthy said a video being used to accuse him of sullying the good name of Malaysia was from 10 years ago which had a very different context.

Waythamoorthy had in the video criticised the alleged discrimination against ethnic minorities, particularly Indian Malaysians.

He said the video which was an interview with a Dutch TV happened shortly after the Hindraf rally in November 2007, which demanded the grouses of ethnic Indians be addressed.

"The peaceful protest turned ugly after the police fired tear gas and sprayed chemically laced water on the people.

"I myself was imprisoned and tortured. Post rally lawyers from Hindraf were arrested under the Internal Security Act and my international passport was revoked by the Malaysian government when I was at the United Nations headquarters in Geneva making representations on the plight of the Indian community," he said in a statement today.

Waythamoorthy said all these happened amid the demolition of Hindu temples, forced religious conversion and eviction of Indians from their traditional estate homes.

He said even BN eventually acknowledged this when the then ruling coalition engaged him in 2013.

"The Umno government and the entire Malaysian community are fully aware of what I did during my five years of exile in the United Kingdom yet they made me a deputy minister in 2013 because they knew they had made a mistake in not addressing the legitimate issues affecting the Indian community," he added.

Waythamoorthy resigned a year later after expressing frustration at not being able to push through reforms in the BN government to help the community.

The leader of the Hindraf movement then backed Pakatan Harapan before the 14th general election.

Waythamoorthy was made a minister after Harapan ended BN's 61 years in power in the May 9 polls.

"Hindraf backed Harapan chairperson Dr Mahathir Mohamad's leadership prior to the 14th general election and mobilised its support for the current government to ensure that the Umno regime can be defeated.

"In the current administration, I am working together with my fellow cabinet colleagues to ensure there is fair treatment for the Indian community and all minorities.

"The government of the day is committed to applying democratic principles to ensure all its citizens are treated fairly and equitably," he said.

The old video has been used as part of a concerted effort to get Waythamoorthy to resign as a minister.

This includes a petition calling for his removal, which received more than 16,000 signatories at the time of writing.