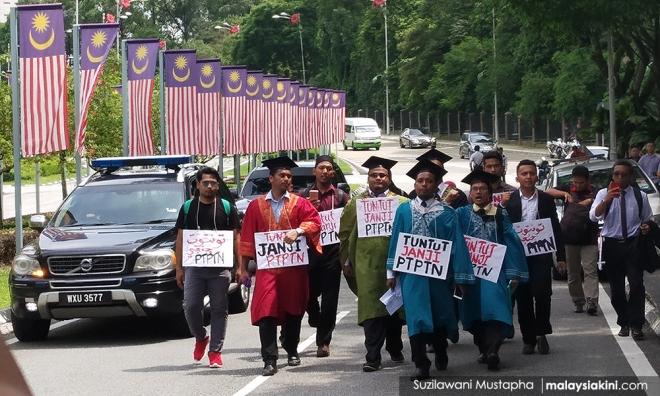 YOURSAY | ‘Borrow and don’t pay? Try that with an Ah Long and see what happens!’

Annonnymous 080: The government guarantees free education only up to secondary level.

Anything above that is a choice. These students could have opted to work. For their tertiary studies, they must be prepared to pay the cost of education, which is already heavily subsidised in this country.

When they took the loan, they had promised to repay and should keep the pledge.

Newday: Your loans were not provided for free in the first place. You signed documents regarding repayment. You have no right to protest in this matter. Suck it up and pay.

I hope more newspapers publish their faces. And employers, look out to see who you should not give responsibility to!

Bornean: The government is only asking a tiny portion of your salary. Try borrowing from those 'Ah Long', and see what they will do to you if you fail to pay the interest.

Pakatan4Life: These parasites who cumulatively sucked the government coffers of RM40 billion are now protesting that they can't even afford to pay two percent of their monthly salary to settle their outstanding debt to the country.

For this, do we still need institutions like Mara? What a disgrace!

They cannot survive without government assistance. They have no shame, no self-pride. They borrow money with no intention of repayment.

Anonymous_3f4b: The crux of the issue is that Pakatan Harapan sold them the promise of only paying back the loans when their salaries reach RM4,000. Now there is an abrupt about-turn by Harapan less than a year after the election, with the coalition citing a dire national financial situation.

This amounts to a breach of trust and this is what the ex-students are angry about. They gave their votes to Harapan under the pretext of an empty promise and are now getting the short end of the stick.

Kahlil Gibran: It’s not fair to cut one's salary when it’s so low. Why are our graduates so unemployable? Because we have a screwed-up education system.

Graduates with degrees work as sales assistants and work in gyms, hotel lobbies or front desks and coffee shops. They cannot speak English so they cannot work abroad.

The government must plan better for its citizens. Why promise to give a moratorium on repayment for those earning less than RM4,000? It was in your manifesto. Nothing in the Harapan manifesto has been honoured.

Prudent: These over-pampered graduates must be taught to pay off their debts no matter how much they earn. Salary deductions of between two and 15 percent are concessionary. By right, they should be docked between 18 and 20 percent.

Otak-Otak: Is this the type of people (graduates) we are trying to produce? Borrowed money with Fat Hope: It is a loan. Not your father’s scholarship.

Undecided: The soft approach by the previous government to recover these PTPTN loans is not good enough.

These protesters do not have any gratitude and letting them have their way will only result in an irresponsible mentality which can only cause problems for the nation.

It is better late than never to teach them a sense of duty and responsibility by making sure they repay a debt.

TehTarik: They borrowed from the government (that is, taxpayers) and promised to pay back the scholarships. So they are now reneging on the agreement.

This sets a bad precedent. Contracts are legally binding and there is a financial obligation to abide by it. We the taxpayers are peeved by their ungratefulness and demand that they pay their dues.

Anonymous_e63900be: I borrowed from PTPTN, too, when I was a student. I delayed payment on the first year I started working.

The second year, I was required to pay double the amount: RM400 for a year before it reverted to the original sum of RM200. It took me 10 years to repay everything. I never whined or marched like these idiots.

It’s due to people like us that you are getting the loans now. Public varsity fees are already heavily subsidised by taxpayers so what more are you asking for?

Malaysia is in this sorry state because of the loose morals of students like these who are protesting.

Dirtbag: You take a loan, you pay it back. In the US, people are still paying off university tuition fees at 40.

Seriously, you take rakyat’s money and don’t even want to pay back RM90 a month. It’s shameful – get your life together.

AnonyMas: Whether you earn RM1,000 or RM10,000, a loan is a loan. Your refusal to pay your loan speaks volumes of your character.

Take two jobs, do some internet business, give tuition. Kids these days have so many opportunities to make money. And these 10 students have no shame!

Banks and employers should take note of these 10 fellows. I would never employ them.

Enlighten: All these students want free education so that they can goof off for another three to four years. Most of them would not get decent jobs after graduation. Most of them are not supposed to be in university in the first place.

Happy Hamster: I feel like marching to Parliament and telling them I won't pay my taxes if these idiots don’t see the need to pay back their loans.