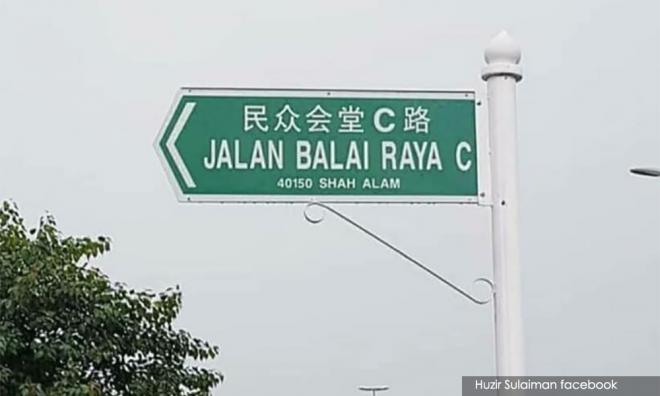 The Sultan of Selangor has decreed that road name signs in Shah Alam which are in dual language be replaced with those in the national language.

This was conveyed to the Selangor state government in a letter from the ruler Sultan Sharafuddin Idris Shah's private secretary Mohamad Munir Bani.

The letter dated Nov 19 said the change must be done immediately and be completed before the sultan's 73rd birthday celebration on Dec 11.

“The sultan has decreed that all road name signs which have Chinese writing in Shah Alam be removed and replaced with signs in a single language, which is Bahasa Melayu,” read the letter.

Umno secretary-general Annuar Musa also tweeted the purported letter and praised the Selangor ruler for his stern stand on the matter.

“His Highness' stand is in line with his powers and role... the time has come for Malay rulers to be strict,” he added.

He said the move to change the Jawi writing to Chinese or Tamil was an insolent act as it was an attempt to discard Malay heritage.

“So to discard (Jawi) and use the Chinese language in its place is a move which is not harmonious in the Malaysian context,” he added.