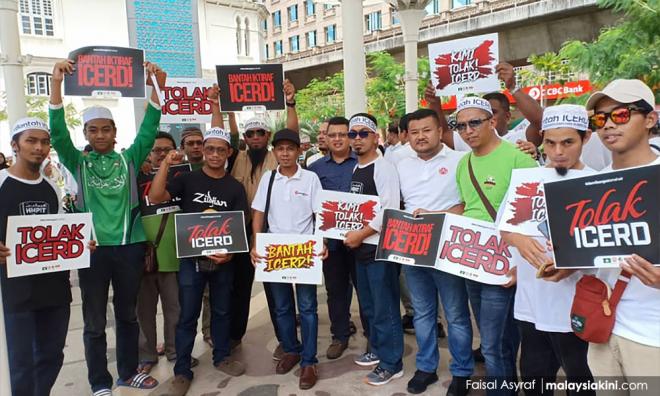 Kit Siang to PAS, Umno: No joint rally against 1MDB too?

DAP veteran Lim Kit Siang has questioned whether Umno and PAS will join forces to hold a protest against the 1MDB scandal and former prime minister Najib Abdul Razak.

"Umno and PAS are getting cosier with each other now with a joint rally in Pasir Salak on Saturday and another major protest rally in Kuala Lumpur on Dec 8.

"But will any Umno or PAS leader make a clear stand against immorality, greed, corruption and abuses of power by making unreserved condemnation of the 1MDB scandal?

"Will Umno and PAS hold a joint protest rally against Najib, the 1MDB scandal and Malaysia becoming a global kleptocracy?" Lim asked in a statement today.

There have been no signs, he said, that the two parties are prepared to do so as their leaders appear not to be concerned at all about the infamy that the 1MDB scandal has brought to Malaysia.

He said that even during the Budget 2019 debate, not a single Umno or PAS lawmaker dared to take the stand that the 1MDB affair was a national catastrophe and that Najib must be held responsible for Malaysia becoming known as a kleptocracy.

"This despite my public reminder before the budget debate that every opposition lawmaker should declare his or her stand on whether the 1MDB scandal was a national catastrophe and whether Najib should be held responsible for Malaysia becoming a global kleptocracy," Lim said.

Umno and PAS announced on Saturday that they are organising a joint protest against Malaysia ratifying the International Convention of the Elimination against Racial Discrimination (Icerd) in Kuala Lumpur on Dec 8.

Ratifying Icerd has been a heated issue, with bumiputera groups opposing it as they say it is against the Federal Constitution's special provisions for the bumiputera.

The matter cropped up after Mahathir told the UN general assembly in September that Malaysia would ratify human rights conventions which it hasn't to date.