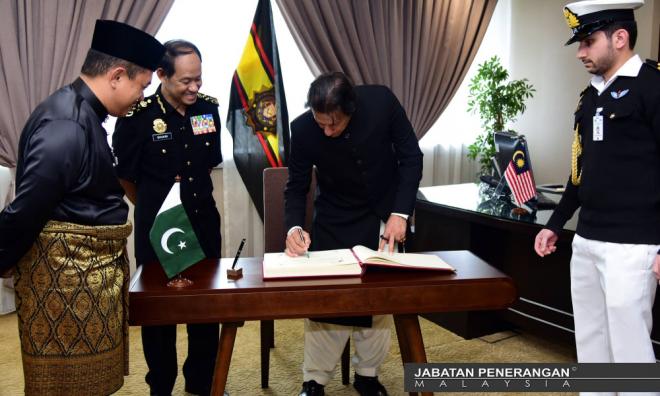 Pakistan Prime Minister Imran Khan visited the MACC headquarters in Putrajaya today, the first foreign leader to do so since the commission's inception 51 years ago.

Imran Khan, who is in Malaysia for a two-day official visit, arrived at the MACC headquarters at about 3.30pm and spent about 30 minutes there.

He was received by MACC chief commissioner Mohd Shukri Abdull, who also briefed the Pakistani premier on MACC’s operations.

"This is the first time in (the MACC) history that a (foreign) prime minister has paid a visit to the MACC," Mohd Shukri said to reporters after Imran Khan’s visit.

Mohd Shukri said Imran Khan had asked whether the MACC had set any (monetary) threshold for initiating an investigation, and he explained that the agency would conduct an investigation even if the value involved was only RM5.

He said the prime minister had also asked whether the MACC had the power to investigate judges or military personnel, and he replied that the country’s laws applied to all and were “impartial”.

Mohd Shukri said the MACC proposed Pakistan send its officials to undergo training with the MACC.

"In Pakistan, there is a body which investigates corruption known as the National Accountability Bureau (NAB) under the Ministry of Justice. They (NAB) are not the same as us, but they want to learn from us," he said.