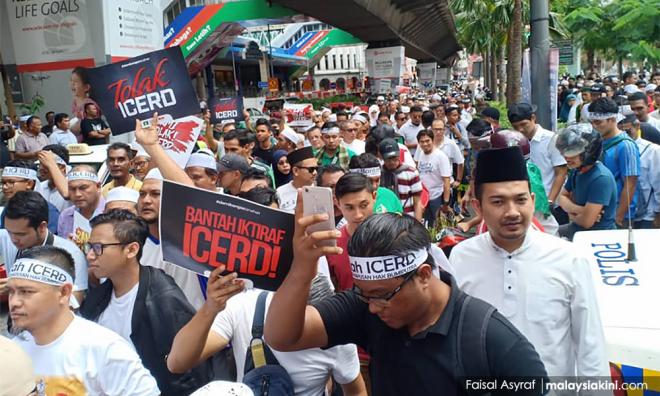 Is the anti-Icerd protest a catalyst to stage riots in the country?

COMMENT | The spate of incendiary speeches, news reports of planned demonstrations on Dec 8, and messages provoking hatred circulating through social media in the last two weeks are cause for alarm.

Persatuan Patriot Kebangsaan (Patriot) is very concerned that the anti-Icerd protest has been used as a catalyst to possibly stage a planned riot and chaos in different parts of the country.

The increasing tempo of the anti-Icerd protests even after our prime minister has stated that we will not ratify the UN convention, the concerted attacks on DAP leaders and bangsa DAP, the accusation of the deputy defence minister as a DAP spy, the accusation of the finance minister diverting funds for Malay students to Chinese temples, the unconfirmed reports of Bible distribution in Penang and Kedah, and the threat to instigate a May13 racial strife - these are connected happenings and not isolated events.

There is a limit to free speeches even in this era of New Malaysia. Speeches and messages by leaders of the newly formed NGO, Gagasan 3, viralled through social media, are aimed to provoke hatred and instigate a racial riot.

These so-called leaders of Gagasan 3 are nobodies and have never been seen to champion any issue of national importance. They are incapable of articulating issues, even of race and religion, in a civil and intelligent manner. They portray their thuggish and barbaric antics with the willful intent to create disorder in our society.

Cui bono, or who benefit if there are racial strife and ruins? The answer is obvious. There are several leaders from the previous administration awaiting trials and under investigations. The stakes for them are very high, and like drowning men, they will do anything, even destroy our nation.

Patriot urges the IGP and the police to closely monitor all the hate speeches and viralled messages by the groups out to create trouble. Nip the problem in the bud before things get out of control.