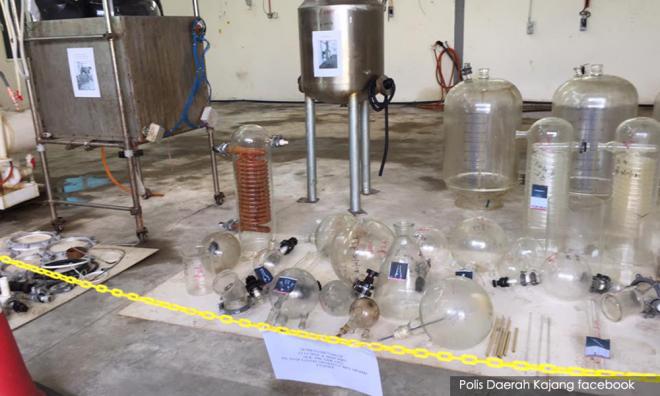 Four police personnel were among nine detained following the discovery of the largest drug lab in Selangor last Wednesday.

The laboratory, located in an industrial area in Semenyih, said to have been operating for a year, was believed to be producing 70kg of syabu (methamphetamine) per day worth RM3.55 million, for 142,000 addicts.

Selangor police chief Mazlan Mansor said based on intelligence, the police raided the premises at 5am on Wednesday, and all arrested were between the age of 27 to 51 years.

In the raid, the police arrested two men, and later that day, a further three men in a car park in Kuala Lumpur.

"Further investigation led to the arrest of four police personnel on Friday and Saturday to assist in the investigation, but we are still seeking to determine how the officers were involved," he told a media conference at the lab here today.

According to Mazlan, police also seized various machines used to process drugs, three vehicles and cash amounting to RM105,500 in the raid.

"Also seized was a liquid believed to be 174kg of unprocessed syabu oil. The oil, if processed, can produce 70kg of syabu," he said.