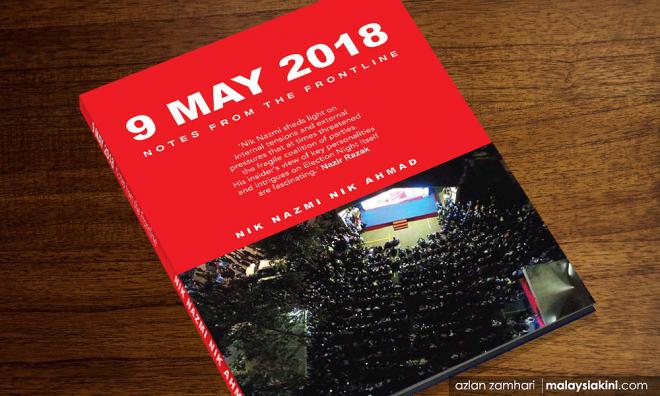 Editor's note: This is the first of a two-part series from Setiawangsa MP Nik Nazmi Nik Ahmad's upcoming book, ‘9 May 2018 - Notes from the Frontline.'

BOOK EXCERPT | In January 2018, Pakatan Harapan held its first-ever convention. A historical understanding was reached in facing the coming 14th general election: Dr Mahathir Mohamad would be the coalition’s candidate for the seventh prime minister. He was 92 years old, and would be 93 in July that year.

The man he sacked and had jailed, Anwar Ibrahim, would be nominated as the eighth prime minister. Anwar’s wife, Dr Wan Azizah Wan Ismail, who was the opposition leader, would be appointed as Mahathir’s deputy prime minister.

The seat negotiation for Pakatan Harapan in Peninsula Malaysia was also concluded. Bersatu had insisted on being given the biggest share of seats – they finally ended up with 52, PKR 51, DAP 35 and Amanah 27.

But the announcement had its drama even on the day. Amanah Johor boycotted the convention because they were not happy with the distribution of seats in the state.

When it was clear that Mahathir would be announced as the candidate for seventh premier, a group of PKR delegates – those who had been opposed to Pakatan Harapan from the beginning and said there would be no future for the coalition without PAS – walked out.

Tensions had been brewing for quite some time. Anwar had always been the opposition's choice for prime minister since 1998. But as he was in prison and unless granted a pardon, he would not be able to run until five years after the completion of his sentence.

Wan Azizah was an option, as opposition leader. The other choice – but perhaps most contentious to longstanding opposition supporters would be Mahathir.

Making Harapan work smoothly was also problematic. The anti-BN coalitions since the Reformasi era had always functioned loosely. There was no formal structure to it and it functioned with the different parties taking charge according to turn.

Out of frustration at an impasse over the leadership structure, Mahathir wrote a letter to Bersatu president Muhyiddin Yassin ordering him to withdraw the party from Harapan before the elder statesman left for London for the 2017 Hari Raya Aidilfitri holidays.

In a bid to save the coalition, PKR vice-president Nurul Izzah Anwar flew to London to meet with Mahathir.

After GE14, Izzah revealed the purpose of the meeting: “I think my mission at the time, my purpose was to ensure the coalition remained intact, and to do so we needed to ensure there were compromises, and several degrees of engagement.” She managed to persuade Mahathir to persevere and Harapan was saved.

Finally, Harapan settled on a structure. Anwar would be de facto leader, Mahathir chairperson and Wan Azizah the president. These were already their positions in their respective parties. The most senior executive leaders of Amanah, DAP and Bersatu – Mohamad Sabu, Lim Guan Eng and Muhyiddin Yassin – would be deputy presidents.

Soon all the Youth wings met as well. Since we were asked to settle on a similar unified structure, as opposed to the old model of rotating chairpersons, I was elected as the first leader of Harapan Youth.

The Harapan convention was planned so that the coalition would announce its promises for political and institutional reform as well as the finalisation of seat negotiations.

Yet some leaders wanted the convention to be the platform to announce who would be the Harapan prime minister candidate. But this would not be a straightforward decision. Back and forth negotiations took place throughout 2017 to appease the diverse strands that made up Harapan and different factions within the individual parties.

Harapan Youth had a meeting close to the convention. It was brought up that we should give our input on who would be prime minister. I told the committee that from my experience, these decisions were beyond our level and would be made by the most senior leaders of the coalition. But many insisted.

A poll was conducted among those present whereby Mahathir’s name was confirmed as the most popular for the first choice. We were asked to give a first and second choice. Azmin came second by a distance.

Someone in the meeting took a photo of the calculations to say that Mahathir and Azmin were the two most popular names for prime minister among Harapan Youth. The whispering campaign by some was that Azmin was the choice of the youth, when that was not exactly the case.

Three weeks before the event, the management of the original venue for the Convention – the Shah Alam Convention Centre – informed the organising committee that the booking was cancelled as no booking fee or deposit was paid.

When the organising committee checked, however, it was discovered that this was not the real reason. There was instruction from “the top” to cancel the booking. The Convention Centre was owned by Selangor-linked corporation, PKNS.

Many senior leaders in Pakatan Harapan were not aware of this. Some of the organising committee members were demoralised. A day after the cancellation of the Shah Alam Convention Centre venue, the committee managed to get the IDCC, also in Shah Alam, as the venue.

However, during the Harapan secretariat meeting, it was informed that the Bersatu supreme council had decided, should there be no ‘major announcement’ during the event, that it would be best that the convention was cancelled.

Thus, even a week before the convention, there were no promotional materials for the event: no posters, teaser videos or even at least a press statement. Some organising committee members said that they might as well postpone the event with the uncertainty. How can the party delegates be mobilised without due notice?

NIK NAZMI NIK AHMAD is the MP for Setiawangsa. 9 May 2018 - Notes from the Frontline is published by Strategic Information and Research Development Centre, and will be available at all major bookshops and online by the end of the week. It will be launched by Anwar Ibrahim on Dec 2 at Piazza, The Curve, Petaling Jaya.