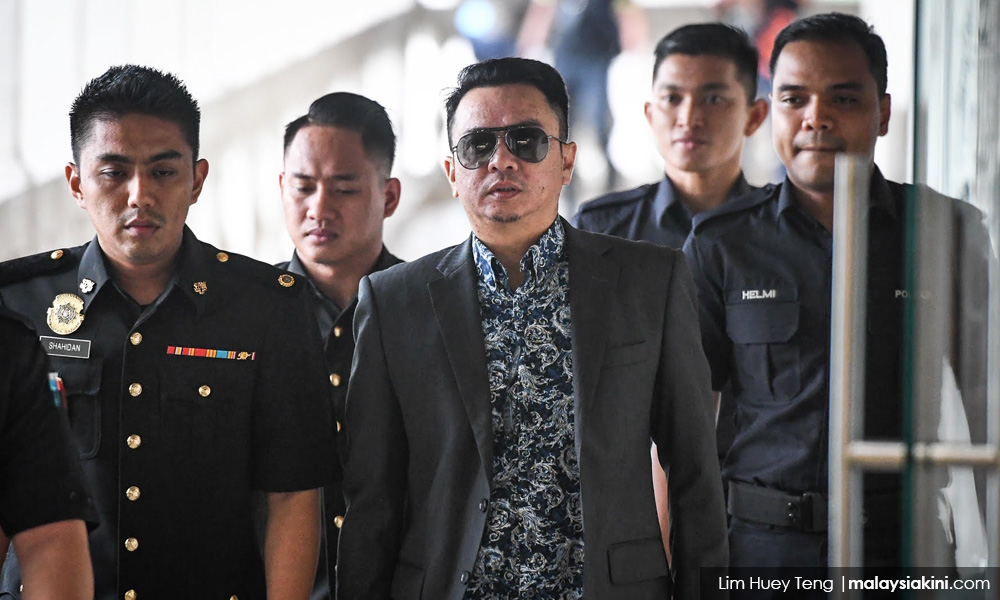 "We (the defence) need 10 days to file the notice of motion and affidavit pertaining to this application and I understand that the prosecution has no objection," he said.

DPP Ahmad Akram Gharib confirmed that the prosecution was not objecting to counsel’s application for the case to be transferred, in accordance with Section 417 of the Criminal Procedure Code.

"However, we were informed that the defence had not made an application yet and we only knew about it yesterday,” he said.

Ahmad Akram said that after the case had been transferred to the High Court, the prosecution would apply for it to be heard together with the case involving Rosmah Mansor, who was facing graft charges involving RM1.5 million in the same project.

Judge Rozina then gave the defence one week from today to file the application and set Dec 12 for case mention to know the status of the application to transfer the case to the High Court.

On last Nov 15, Rizal, 44, pleaded not guilty to four counts of soliciting for and receiving bribes amounting to RM5.5 million for himself and Rosmah involving the supply of equipment and installation of the solar hybrid system for rural schools in Sarawak.

In the first charge, he was accused of soliciting, on behalf of Rosmah, RM187,500,000 which was 15 percent of the contract value, from Saidi Abang Samsudin, the managing director of Jepak Holdings Sdn Bhd.

The money was as inducement for Rosmah to assist the company in securing the Hybrid Photovoltaic System Integrated Project and the maintenance and operation of the gen sets/diesel for 369 rural schools in Sarawak, worth RM1.25 billion through direct negotiation from the Education Ministry.

In the second charge, Rizal was accused of soliciting RM25,000,000 for himself from Saidi to ensure that Rosmah would assist Jepak Holdings with getting the project.

On the third charge, Rizal was accused of receiving RM5 million on behalf of Rosmah from Saidi as a reward for her for assisting Jepak Holdings to obtain the same project. The offence was allegedly committed at the REIT Management Sdn Bhd lobby, 168, Pavilion, Jalan Bukit Bintang in Kuala Lumpur, on Dec 20, 2016.

Rizal was also charged with receiving RM500,000 for himself from Saidi as a reward in ensuring that Rosmah assisted Jepak Holdings obtain the same project. He allegedly committed the offence at No 1, Laman Damai Sari, Jalan 1/61, Bukit Segambut in Kuala Lumpur on Dec 23, 2016.

The charges were made under Section 16(a)(A) of the Malaysian Anti-Corruption Commission Act 2009.

The offences are punishable under Section 24 of the same act, which provides for a jail term of up to 20 years and a fine not less than five times the amount or value of the bribe or RM10,000, whichever isn higher.