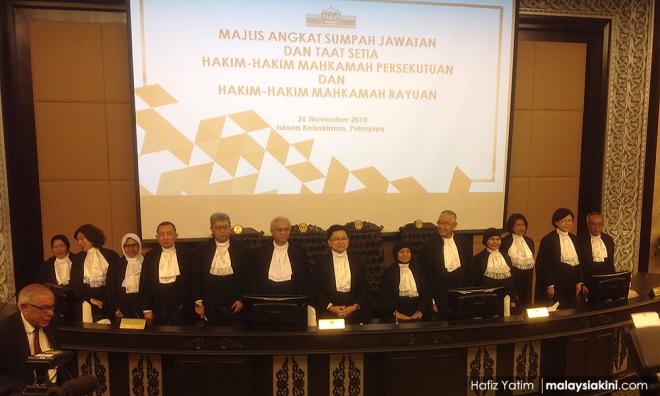 Elevation of judges: Seniority must be the overriding factor

The Malaysian Bar also welcomes the increase in gender and ethnic representation among the judges of the appellate courts resulting from these elevations. We have frequently advocated greater inclusivity and diversity in the appointments and promotions of judges.

We note, however, that several Court of Appeal judges and High Court judges who rank higher in terms of seniority have been bypassed for promotion, for unknown reasons.

While we do not question the abilities, capabilities or suitability of the judges who were elevated, we are concerned that the omission of the more senior judges may invite an adverse perception of the judiciary as a whole.

The Malaysian Bar has consistently called for the appointment and promotion of judges to be reformed - clearly defined criteria for the selection process, meaningful consultation with all relevant stakeholders and transparency and accountability of all involved in the appointments processes - are essential.

Until such reform takes place, seniority should be the foremost criterion in any promotion exercise.

It must naturally be assumed that each and every judge already possesses all the attributes required of a judge, as well as the highest possible standards of integrity. That being the case, all judges (with the rarest exceptions) should meet the criteria for promotion when their turn comes, with an additional factor being the experience that seniority brings.

There must, therefore, be strong, cogent, acceptable and discernible reasons for any departure from seniority - reasons that will withstand public scrutiny.

The bypassing of more senior judges does a significant disservice to the judiciary because it lends to the negative inference that these judges are deemed to be less qualified or less suitable for promotion.

The uncertainty judges face about their future does little for the morale of judicial officers who have made a commitment to a career on the Bench. It also does little to dispel unnecessary and unhealthy speculation about promotions, which is unfair to those who are promoted.

All these do not augur well for public confidence in the judiciary and the administration of justice and would be inimical to the public interest.

The Malaysian Bar welcomes the statement made in the press release issued by the Office of the Chief Justice of the Federal Court of Malaysia on Nov 26, 2018, that “(T)he “Malaysian Judiciary will not countenance any judicial interference of whatsoever nature by anyone, especially by judges in the disposal of cases before the court.”

Judicial independence is sacrosanct, and even a mere spectre of judgments being tainted by undue pressure is cause for grave concern.

The Malaysian Bar continues to be deeply troubled by the allegations of judicial interference that have been raised by a judge of the Court of Appeal and by a member of the Bar.

The above-mentioned press release stated that the judiciary, in its internal investigations, was “not in a position to make a definitive finding” (in the former case), and had to suspend its inquiry (in the latter case).

In light of these inconclusive outcomes, we reiterate our call for a Royal Commission of Inquiry (RCI) to be established, without delay, to investigate these serious assertions of judicial misconduct as well as to recommend holistic reforms to improve and strengthen the judiciary.

It is imperative that immediate measures are taken to ensure that no manner of coercion, influence or threat is ever brought to bear on any judge.

ABDUL FAREED ABDUL GAFOOR is vice-president of the Malaysian Bar.