Billionaire and philanthropist George Soros said while former premier Dr Mahathir Mohamad employed the right measures to tackle the 1997 Asian economic crisis, he barked up the wrong tree by blaming him.

Calling Mahathir his best publicity agent, Soros said: "He accused me of speculating for political reasons because he knew I was concerned about the dictatorship in Myanmar (Burma) and he knew I was engaged in the market, so he put the two things together. 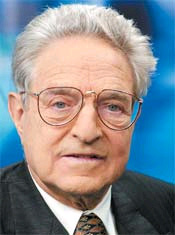 "But they are totally separate because I invest my shareholders' money with the sole purpose of making as much money as possible. Then, I use the money I make to foster open societies," he told the Jakarta Post daily in an interview during his brief visit to the Indonesian capital.

According to a Bernama report on the interview, Soros said the idea that it was speculation that caused the financial crisis was also wrong because it was the wrong policies pursued by authorities that caused the crisis.

"I don't actually control the market; I can only guess. The authorities can control the exchange rate and they maintained fixed rates too long," he added.

He made the remark on Mahathir when responding to a question from two reporters of the paper on how did he reconcile the fact that most of the money he donated for charitable purposes came from speculating activities.

Soros said as long as it was done according to the rules he was not doing anything illegal or immoral and that he did not use the shareholders' money for political purposes.

"I only use my own money for philanthropic purposes," he said.

In another interview with the News Straits Times , the 75-year-old financier commended Mahathir for the measures employed during the economic crisis.

It is ironic that I actually agree with the measures he (Mahathir) took to deal with the financial crisis. He did the right thing," he said. "Malaysia suffered less than its neighbours," he added.

According to the report, Soros has not slipped into retirement to enjoy his wealth but continues to fight and campaign for his many causes.

Topping the list is opposing US president George W Bush and his administration's current war on terror.

Soros believes that the use of military force against terrorism will only create a vicious cycle of death of destruction.

"We must avoid doing the same thing, killing innocent people, and war by its very nature claims innocent victims

"When we want to wage war, you need to hit somebody. And the terrorists are hiding so there is a great danger you kill innocent people and then you set off a vicious circle because people feel the same way about you, the way you feel about the terrorists," he was quoted as saying.

According to him, promoting 'Islam for Peace' was a far more effective way of stemming out terrorism than waging wars.

As an American citizen, Soros is also deeply concerned and "distressed" with the "dangerous" policies of the Bush administration.

He spent millions during the 2003 presidential elections to oust Bush.

"Since I am an American citizen, I feel I have every right to interfere in the internal affairs of the United States. In the last elections, I gave whatever I could to work against the re-election of President Bush," he said.

While Soros says he agrees with Bush in forging democracy, the former is against the use of military force.

"We happen to agree on the importance of introducing democracies and open societies. I do not believe it can be done by military force.