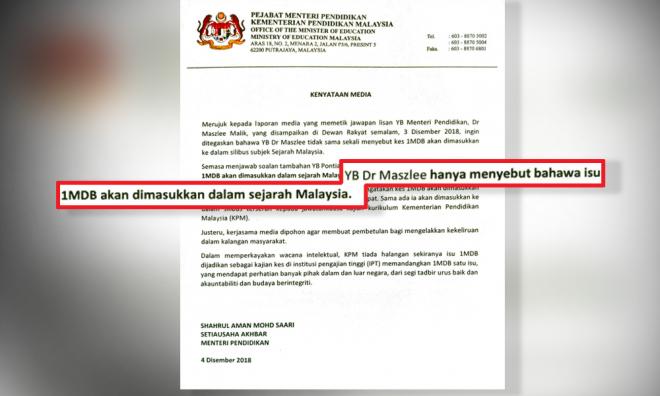 Aide: Maszlee did not say 1MDB will enter History syllabus

"Referring to media reports on Maszlee's oral answer delivered in the Dewan Rakyat yesterday, I want to stress that Maszlee did not say that the 1MDB case will be entered into the History syllabus.

"When answering an additional question from Pontian MP (Ahmad Maslan), Maszlee only said that the 1MDB issue will enter the annals of Malaysian history," he said in a statement.

Any decision on whether it is entered into the syllabus, Shahrul added, will depend on the Education Ministry's curriculum research committee.

He also urged cooperation from the media to make corrections on this matter to allay confusion.

"For the sake of enriching intellectual discourse, the ministry has no objections if the 1MDB issue is made as a case study at tertiary education institutions, seeing as 1MDB is an issue which received a lot of attention from within and outside the country, in terms of good governance, accountability and the culture of integrity," his statement read.

Yesterday, Malaysiakini reported Maszlee saying that the 1MDB scandal will be recorded as part of Malaysian history, so that similar scandals would not reoccur in the future.

"I can give you my assurance that the 1MDB issue will be included in Malaysian history so that future generations will not repeat it.

"So will the serious crimes committed by politicians in the robbery (of the nation's wealth)," the minister told the Dewan Rakyat yesterday.

Maszlee, who was speaking on efforts to revise the History subject, did not say if the 1MDB scandal would end up in the school curriculum.