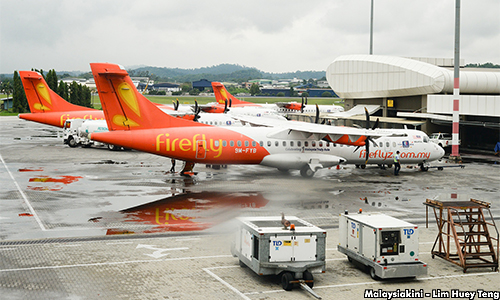 Firefly has become a casualty of the dispute between Putrajaya and Singapore over airspace to the south of Johor.

This after the airline failed to secure landing rights at Singapore's Seletar Airport, while its previous landing spot in Changi has been sold to another airline.

Firefly CEO Ignatius Ong is appealing for Putrajaya to intervene and help reclaim its spot in Changi pending a resolution on the Seletar issue.

“We are urging the Malaysia government to assist, since this is (government-to-government) now,” Ong was quoted as saying by The Malaysian Insight.

Firefly was reportedly slated to move its Singapore operations from Changi to the Seletar terminal on Dec 1.

However, Putrajaya had on Nov 30 moved to object landing protocols for the new terminal, citing airspace sovereignty.

Transport Minister Anthony Loke said this is as the new landing protocols could affect development in Pasir Gudang, Johor, as well as affect shipping operations at Pasir Gudang Port, which is located near the airport.

Loke said Putrajaya is also seeking to reclaim airspace it had delegated to Singapore in 1974.