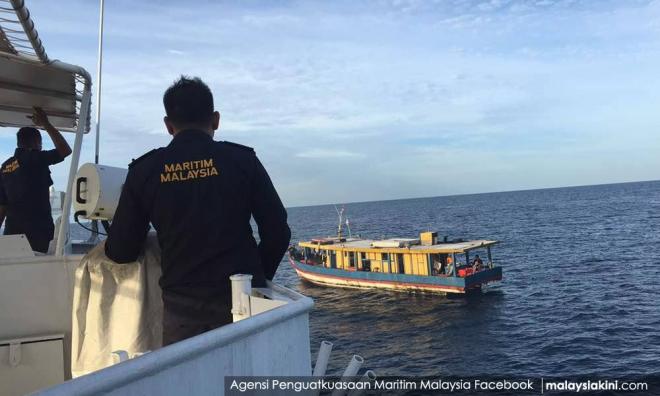 Police are investigating a report by a fishing boat owner claiming that his four workers, including a skipper, are missing while fishing in the waters of Pegasus Reef, Kinabatangan, on Wednesday.

This is the same area where a group of armed attackers had attacked a trawler on Wednesday.

Sabah Police Commissioner Omar Mammah, who confirmed receiving the report on Wednesday night, said, based on the report, when the boat was found, its engine was still running but there was no one on board.

“On the same day, a trawler boat’s skipper was shot on the left thigh, (another) fishing boat was found with the engine still running but with no one on board. Rightly, there should have been four people on the boat.

“We don’t know whether these four people were kidnapped or have run away. I dare not say if they have been kidnapped until there is a confirmation. Except that there was indeed a report received from a fishing boat company saying that four of its workers were missing from the boat," he told reporters after attending the monthly meeting of the Sabah Police Contingent Headquarters in Kota Kinabalu today.

He said two of the four fishermen, aged 19 to their 40s, were foreigners while the rest were locals.

He said, to date, the police had yet to receive any call from any party seeking ransom over the missing four fishermen.

Concerning developments on the trawler’s skipper, Omar said an investigation was still underway to determine if the attackers came from the direction of land or the waters of the Philippines.

However, he said the four-engined speedboat used by the suspects, who were all masked, were different from those used by criminals prior to this.

On Wednesday, the trawler boat’s skipper, Didy Saviady, in his 40s, who was heading to Papua New Guinea from Bintulu, Sarawak, was hit on his left thigh after he was shot at by four armed men in a robbery attempt at 6.30 pm in the waters of Pegasus Reef.