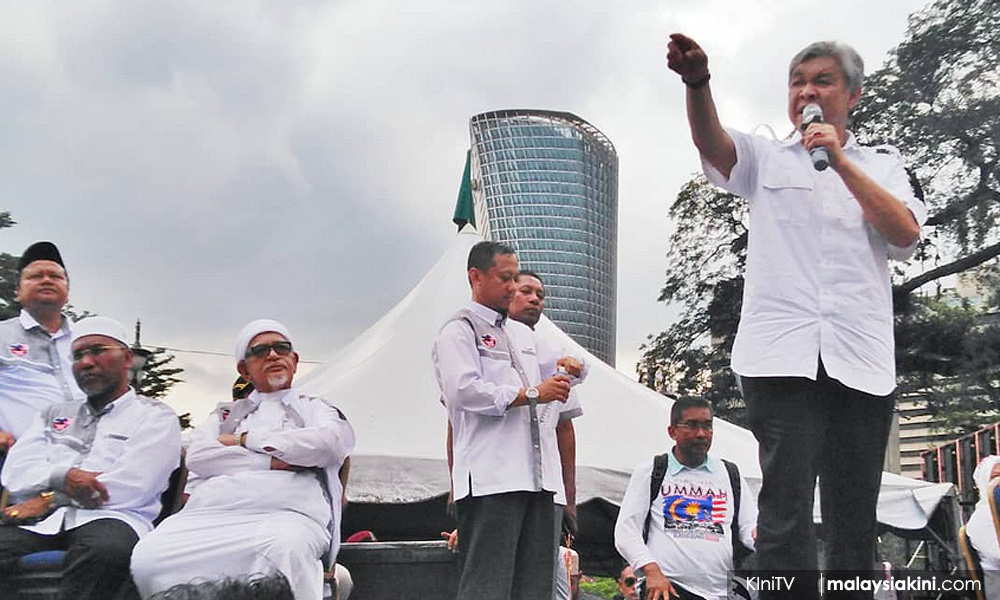 MP SPEAKS | The biggest winner in the anti-Icerd rally in Kuala Lumpur yesterday was PAS, which managed to distract public attention from the fact that its president Hadi Awang had reduced PAS from a national party achieved under the presidency of Fadzil Noor to a regional political party in the 14th general election.

The biggest loser of the rally was Umno, as for the first time in 72 years, Umno president Ahmad Zahid Hamidi played a secondary role to that of Hadi, with the former wooing PAS for a union while PAS played coy in the courtship.

Hadi’s ambition for PAS has increased exponentially before and after the 14th general election.

Before the 14GE, Hadi wanted PAS to play the role of “king-maker” by winning 40 parliamentary seats, which would enable him to prop up Najib Abdul Razak to continue as prime minister, heedless of Najib’s role in hurtling Malaysia in the trajectory of a rogue democracy, a kakistocracy, a failed state and a global kleptocracy.

Now, Hadi could not be satisified to be a “king-maker” for Umno to continue to rule Malaysia, as he would himself want to be prime minister in a political scenario where Umno needs PAS more than PAS needs Umno!

Hadi has said that all Muslims must oppose the ratification of Icerd, alleging that Icerd is a “Freemason agenda” with the intention to destroy religion, nation and society.

But there was not a word of this “Freemason agenda” and international conspiracy against Islam in the speeches at the anti-Icerd rally yesterday.

The rally should have launched an international campaign to save Muslims in the world from the Freemason conspiracy, as 99 percent of the 1.9 billion Muslims in the world are living in 179 countries which have ratified Icerd, including 55 of the 57 member nations of Organisation of Islamic Conference (OIC), such as Saudi Arabia, Indonesia, Turkey, Qatar, United Arab Emirates, Egypt, Iran, Iraq, Jordan, Kuwait, Palestine, Algeria, Morocco, Afghanistan, Bangladesh and Pakistan.

I believe that that the overwhelming majority of Malaysians from all over the country who attended the rally did not realise that Icerd is not anti-Malay, anti-Islam or anti-Malay rulers as 36 of the 38 countries with monarchical systems have ratified Icerd for the past half a century.

If Malaysia is to become a world top-class nation, there must be no room for the toxic politics of lies, hate, fear, race and religion.

Let us learn from the United Arab Emirates, which introduced a National Tolerance Programme in 2016, together with the appointment of a Minister of State for Tolerance, which underlined the UAE's commitment to eradicating ideological, cultural and religious bigotry in the society.

Under the UAE National Tolerance Programme, there is an anti-hate speech law which criminalises any acts that stoke religious hatred or that might insult religion through any form of expression, be it speech or the written word, books, pamphlets or in online media platforms.