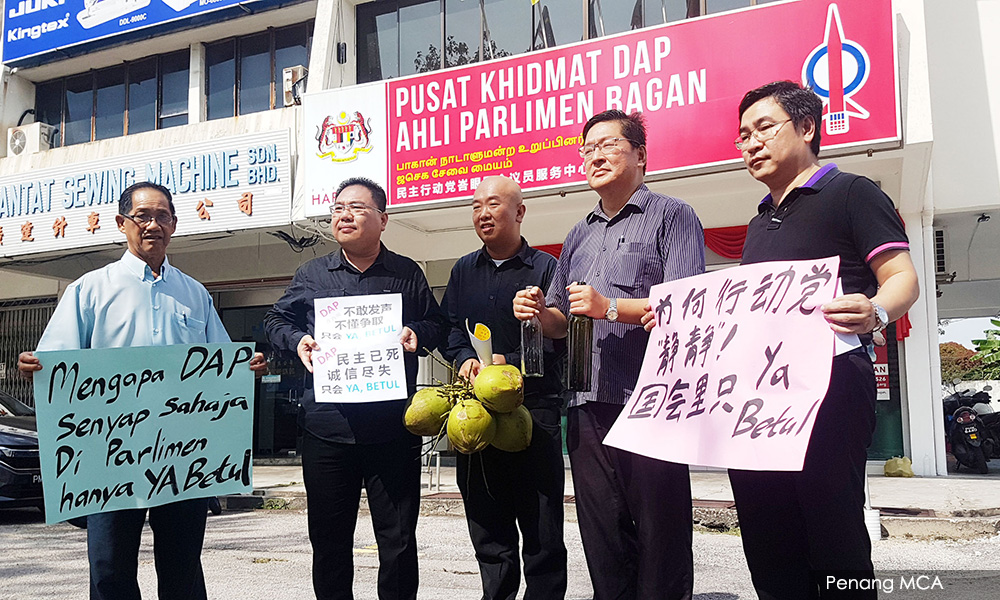 MCA 'gifts' of coconuts and bottle to Guan Eng over Icerd

Bagan MCA division today "gifted" several coconuts and an empty wine bottle to Finance Minister Lim Guan Eng's office in Penang in protest against the latter's role in Putrajaya's decision not to sign the International Convention on the Elimination of All Forms of Racial Discrimination (Icerd) treaty.

The symbolism behind the coconut and bottle is that if read together, in that order, in Hokkien, the two items would be phonetically similar to the Malay phrase "ya, betul" (yes, correct).

Bagan MCA division head Tan Chuan Hong said DAP's support for the cabinet's decision not to ratify Icerd showed that the party was "too scared" to speak up and was capable of only saying "ya, betul".

"If this was the case, I expect Guan Eng to apologise publicly on behalf of DAP," Tan said in a statement today.

He said it was also regrettable that DAP parliamentary leader Lim Kit Siang had mentioned the May 13 riots in explaining his support for the cabinet's decision not to ratify Icerd.

Kit Siang had opined that Malaysia should not ratify Icerd until there was wider understanding among Malaysians on what Icerd was and its compatibility with the Federal Constitution.

He said that it was understable that the cabinet had decided against ratifying Icerd because of the ongoing misinformation campaign and inflammatory statements being made by opponents of the government.

"No Malaysian would want Malaysia to ratify the Icerd at the price of another May 13 racial riot in the country, as there are irresponsible elements seeking to incite and escalate racial and religious distrust, animosity and hatred to engender the conditions to replicate another May 13 racial riot in Malaysia, talking about the Malays running amok and 'rindu May 13'," he said.

When contacted, Bagan DAP parliamentary officer Tang Keng Leong confirmed that they had received the "gifts" and memorandum from MCA.

The memorandum would be passed to Lim, he added.

Further reading: The Icerd outrage - what sparked it?