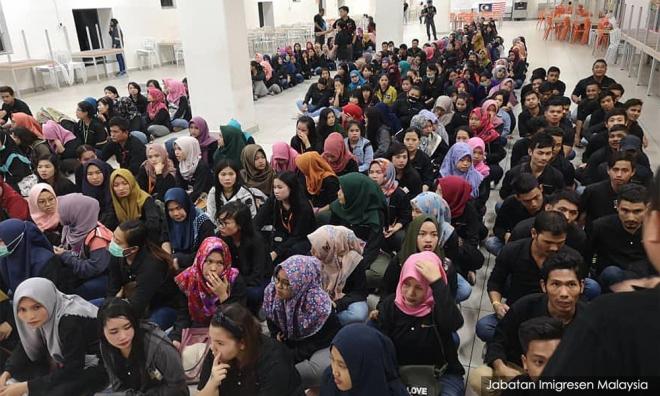 Some 73,000 foreigners were issued the “Not To Land” (NTL) notices at all gateways into the country since Jan 1 this year, said Immigration Department director-general Mustafar Ali.

He said the order issued by the Immigration Department was under Section 8 of the Immigration Act 1959/63 for suspicion of threatening national security and sovereignty.

Speaking to reporters after launching the Immigration Day 2018 celebrations at the KLIA Malaysian Immigration Department, Mustafar said among the offences committed by foreigners include falsifying their student status, damaged passports, and almost-expired passports.

“Some foreigners were issued the NTL notices because they were not claimed by their employers within six hours of landing in Malaysia as was the condition. So we had no other choice but to send them back after they waited up to three days at the airport.

“In the cases involving falsifying their student status, there were foreigners who attached a false offer letter from institutes of tertiary education which had long closed down,” he said.

Mustafar also said more than 46,000 were detained in 15,000 operations conducted by the Immigration Department throughout the country since Jan 1.

Of these, he said, there were less than 9,000 illegal immigrants at the Immigration detention depots, while the rest had been sent back to their countries of origin and compounds issued to them.

The majority of these illegal immigrants were Indonesian, Indian, Bangladesh, Nepal and Myanmar nationals.

Mustafar also said action had been taken against 1,400 employers who had contravened the law.