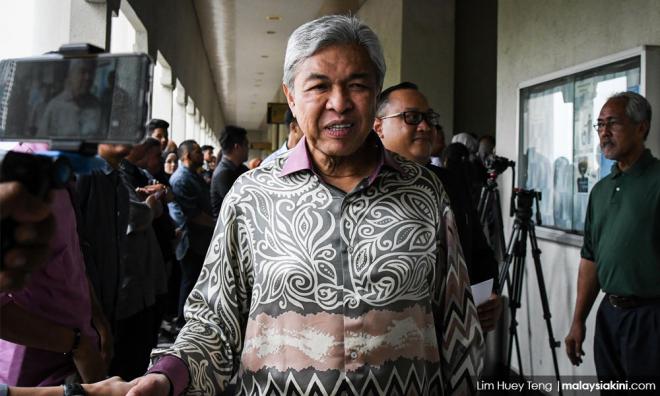 It was Umno that brought upon humiliation and indignities upon itself by aiding and abetting the 1MDB scandal, Iskandar Puteri MP Lim Kit Siang said.

He was responding to Umno president Ahmad Zahid Hamidi who had yesterday hinted of the "punishing" conditions imposed on Umno and the humiliation it suffered in meetings he attended.

"All these indignities and humiliation were brought about by the Umno leaders themselves, when they failed Umno and Malaysia, and aided and abetted former prime minister and former Umno president Najib Abdul Razak in the monstrous 1MDB corruption money-laundering scandal," Lim said in a statement today.

There has been no remorse or repentance among Umno leaders thus far, for what Lim described as this act of "disservice" and even "treason" to the country.

Zahid, in particular, played an important role in enabling the 1MDB scandal as Najib's right-hand man, he said.

The former deputy prime minister, he pointed out, even claimed in 2015 to have met with the Saudi Arabian royal family who deposited the RM2.6 billion to Najib's personal bank account.

Even now that Zahid has taken leave as Umno president and his deputy has taken over his duties, Lim said Najib and the 1MDB scandal would continue to "hound and haunt" Umno leaders.

Zahid yesterday announced he would step aside as Umno president, as more Umno MPs quit the party in protest of his leadership.

"In light of the crisis faced by the party today, I have decided to entrust the deputy president with the duties of the Umno president.

"I urge that no more of our MPs or assemblypersons quit the party," he said.

Zahid later said he was not resigning, but only going on leave so that Mohamad could run the show.