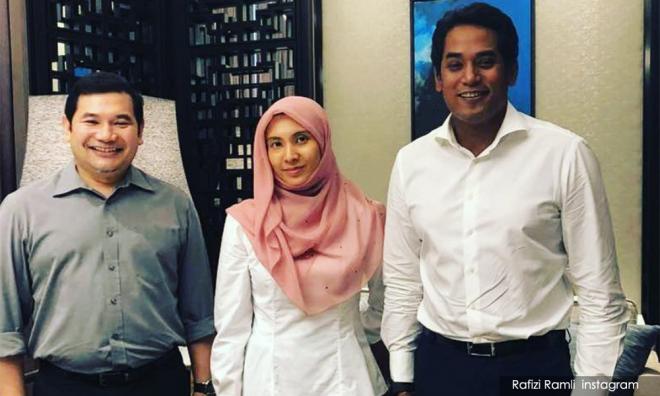 Rafizi Ramli has denied that a recent meet among himself, former PKR vice-president Nurul Izzah Anwar and BN lawmaker Khairy Jamaluddin was to discuss the forming of a new party.

In a tweet, the former PKR vice-president sought to poke fun at speculation that the trio - who often appeared together and interact frequently on social media - were planning on forming a new party aimed at the youth.

"Thank you Berita Harian for covering me, Nurul Izzah and Khairy Jamaluddin having lunch.

"(The purpose of the lunch meet) was totally not to discuss (party) hopping or forming a party.

"KJ (as Khairy is more popularly known) was teaching me how to use Instagram filters. Izzah was giving children's school tips. I was giving tips on how to become fat," Rafizi quipped on Twitter:

He shared the link to a Berita Harian report this morning that speculated the three young leaders could be heading a new political platform based on young people.

The daily stated that this was because the three have been spotted to have become close, frequently exchanging views during meetups and on social media.

The meeting among Rafizi, Nurul Izzah and Khairy, who is Rembau MP and former Umno Youth chief, was reported to have taken place in Bangsar in Kuala Lumpur yesterday.

Speculation they were hatching a political plan was further fanned, the daily added, after Nurul Izzah's sudden announcement on Monday that she was resigning from her post as PKR vice-president.

The Permatang Pauh MP has also declared that she was resigning as the party's Penang chief and that she would not be serving the federal Pakatan Harapan government in any capacity.

Nurul Izzah said she believed her course of action was necessary to enable the successful fulfilment of the Harapan government's promised reform agenda.

Rafizi respects her decision to resign

Rafizi was among those who came out in support of Nurul Izzah, stating that while he hoped she would reconsider, he nonetheless respected her decision to resign.

“I wish to take a positive angle. I read it (the resignation) as a principled move which would allow her to raise issues concerning the public, which is in line with reformasi in an objective manner,” he had said.

Nurul Izzah won the PKR vice-president post with the highest number of votes in the recent party polls, which also saw her support Rafizi in his bid for the deputy presidency. However, Rafizi lost to incumbent Mohamed Azmin Ali.

On Dec 10, Rafizi posted a picture of the three of them with the caption that they often met for lunch and that while from different parties, they shared the same aspirations for a Malaysia "that draws strength from the differences we have".

Former Gerakan Youth chief Tan Keng Liang had also mooted such collaboration among the three, saying that this would afford the country an alternative other than Prime Minister Dr Mahathir Mohamad and his designated successor, PKR president Anwar Ibrahim, who is Nurul Izzah's father, or to Umno.