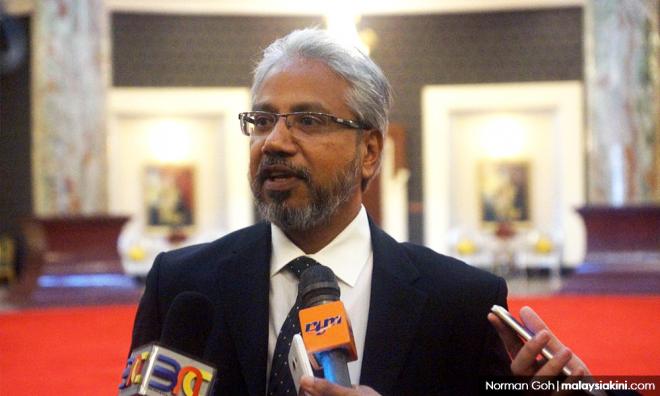 DAP Youth has defended Minister in the Prime Minister's Department P Waythamoorthy amid calls from within the ruling coalition and opposition for his head to roll.

The wing's secretary Teh Hoong Keat said the allegations against the minister with regard to the Nov 27 riot outside the Sri Maha Mariamman temple in Subang Jaya and the death of firefighter Muhammad Adib Mohd Kassim were slanderous and baseless.

"It is obvious that some parties are deliberately turning the minister into a 'scapegoat'.

"The government should be fair and open in resolving Adib's death by arresting the real culprits instead of allowing 'hellraisers' to continue until another victim – Waythamoorthy- becomes a scapegoat,” he added in a statement today.

Teh (photo above) also urged the government to clamp down on those who stoke racial sentiments for political gain.

Adib, 24, was one of the Fire and Rescue Department personnel deployed to the scene when rioters started torching vehicles.

According to the police, he was dragged out of the vehicle and assaulted. He succumbed to his injuries on Monday night.

He said submitting the memorandum does not reflect disrespect as it was a move to furnish a request or suggestion to the right person.

“Of course, we have high hopes that our request becomes a reality. However, we will abide if the prime minister decides otherwise,” he added in a statement.

“Why didn't Ramasamy urge the leadership to take action against him? Does he not consider this as questioning the wisdom and decision of the prime minister?

“Ramasamy must be more cautious when making statements in future,” he added.

Stop being a burden to PM and quit, Kadir tells Waytha
21 Dec 2018
Scapegoating Waytha is another temple riot crime
21 Dec 2018
'Syed Saddiq did not lead group asking for Waytha's resignation'
20 Dec 2018
Ummah: Thirty NGOs to give memo to PM for Waytha's sacking
20 Dec 2018