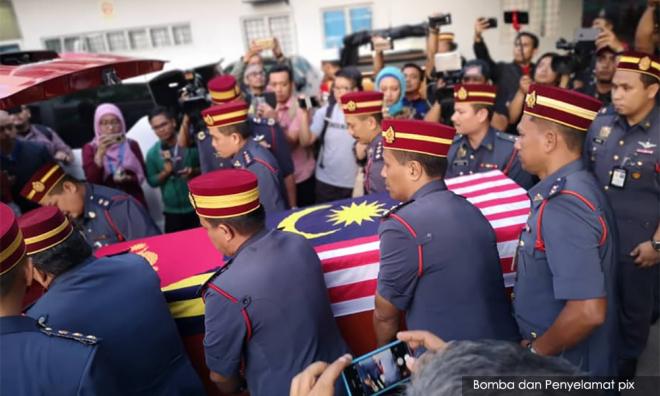 RCI needed to prevent another Adib or Kampung Medan

COMMENT | Many things have far-reaching implications, more so than we may care to recognise or remember. But unless we are prepared to do so, we may not be able to escape the implications, some of which may be fatal.

Ganabatirau initially blamed a "Muslim group" for the riots but later retracted the statement and apologised.

Together with three other Indian ministers, Waythamoorthy slammed the police statement on the attack. The Subang Jaya district police had characterised the incident as "a misunderstanding which arose from the issue of the temple’s relocation."

If the police's intention to downplay the incident as “misunderstanding” was to de-escalate tension, it achieved exactly the opposite.

The pain of Kampung Medan

It evoked memories of what happened in the Kampung Medan incident on March 8, 2001, where a neighbourhood misunderstanding occurred over a traffic obstruction involving a Malay family preparing for a wedding and an Indian family having a funeral wake.

The clash went out of hand and eventually more than 400 were detained by the police. And six lives were claimed, incidentally all Indians, and many more were injured. But there was no serious effort to seek justice or reconciliation.

Waythamoorthy’s brother Uthayakumar (photo) wrote this in a letter to the then-inspector-general of police Musa Hassan:

"And with the Human Rights Commission (Suhakam) not wanting to hold an open inquiry as at date it appears that the whole country is wanting to hush up this tragedy.”

An application for judicial review on Suhakam's failure to investigate filed in 2002 by a victim was thrown out by the court on technical grounds.

In 2010, human rights activist K Arumugam failed in his judicial review suit to challenge a ban on his Tamil-language book on Kampung Medan (which is based on a doctoral thesis, which isn't banned).

Perhaps the state's apathy and inaction were driven by consideration to not escalate communal tension, but if that was the case, it achieved exactly the opposite.

Was the Kampung Medan incident communal in its nature? Some researchers argued that the root cause of the conflict was poverty. If that was the case, the incident did not draw more attention to class and urban poor.

Instead, it made many Indians across classes seeing common plight in being Indians. The court’s rejection of the two judicial review applications was perceived by Indians "as a ‘racist attack’" and a denial of justice.

(Interested readers may want to read a paper on "The Round Table - The Commonwealth Journal of International Affairs" by Dr Thaatchaayini Kananatu (Monash University Malaysia) that brilliantly explains the link between Kampung Medan and Hindraf, which is free for download till Jan 31).

Should we then be surprised by the overreaction, or inappropriate reaction to the initial Seafield temple riot, when devotees were attacked amidst praying and Subang Jaya police's downplaying the severity?

Most of us probably never remember what happened to the six Indians who died in Kampung Medan 17 years ago. We all have our busy lives to live.

But the injustice felt strongly then seemingly resulted in politicians' apparently 'inappropriate' and 'insensitive' responses, which many now claim to have driven the mob’s attack on Nov 27 that claimed Adib's life and left his fiancée and family in great suffering.

If we do not deal rightly with the pain and anger many felt over Adib’s death, we may soon see another Adib perishing – maybe of another ethnicity, gender, age group, occupation and in a different circumstance – in another conflict involving members of different ethnic groups.

In any society, people clash. When a society consists of different ethnoreligious or cultural groups, is it possible to ensure people only clash with those who are from the same community?

For example, road accidents can easily turn into violent clashes or mob attacks. Can we make sure people don't hit others of different ethnoreligious groups when driving? Can we force people to not recognise the communal identities of parties in an accident or sanitise news to that effect?

Clearly, to make our diverse society safe for everyone, the key is not preventing individuals of different ethnoreligious categories from entering conflicts or clashes, but for others to see those in conflict as individuals in actions, not representing their respective communities or acting in their interests.

That needs rule of law and cross-communal solidarity to defuse anxiety and hostility.

The state must not be seen as 'siding with' or 'being soft' to any side. To begin with, we need a more effective, impartial and trustable police force, which may take more than the overdue establishment of Independent Police Complaints and Misconduct Commission (IPCMC).

At the societal level, we need to stop seeing everything from a distorted lens that perpetuates a sense of collective victimisation.

Instead of putting up a monoethnic lineup to defend 'our people', why not we show a multiethnic front of solidarity? Would that not be more powerful to “our people” who need support?

Rule of law and cross-communal solidarity did not prevail in the Kampung Medan incident, claiming six lives and leaving a community wounding.

Rule of law and cross-communal solidarity also did not prevail in time in the Seafield temple incident, claiming Adib’s life and leaving another community wounding.

Beyond punishing politicians who made inappropriate comments, we need to rethink how we handle clashes in our daily lives that, just by chance, easily involve individuals from different communities, so that individuals in conflicts do not become communities in conflict.

We need a better SOP than a mere denial of any allegations of ethnic conflicts. We need to be a more resilient society, with more effective responses to quash anxiety and hostility when people clash.

Perkasa wants an RCI on Adib's death. I support the idea of RCI, but it should be for truth and reconciliation, not to go on a politically-motivated blame-game.

The RCI should study how we might better handle clashes involving people of different communities, learning from our tragic failures in Kampung Medan and Seafield.

Alternatively, the fact-finding and learning can be the first task of a national harmony and reconciliation commission, as mooted by Minister in the Prime Minister’s Department Mujahid Yusof Rawa.

In any case, the time to bury our heads in the sand is over.

WONG CHIN HUAT studies electoral, party and identity politics. He is head of the institutional reforms and governance programme at the Penang Institute.