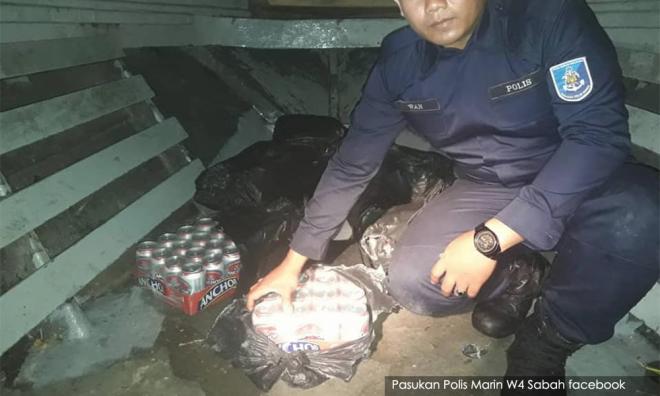 An attempt by several individuals to smuggle contraband alcoholic drinks (Anchor Beer) into the country this morning came to an unexpected end when a Labuan Marine Police patrol caught up with them in Sungai Sarap Menumbok.

Although the smugglers managed to escape in a beer-filled van, they left behind contraband worth RM6,000 and a speedboat with a Yamaha engine worth over RM190,000.

Sabah Marine Police (Region 4) commander Mohamad Pajeri Ali said the patrol boat was conducting a routine operation in Labuan waters at about 1.30am when they saw a speedboat from Labuan heading towards the Menumbok subdistrict on the mainland.

"We tailed them for several minutes before the speedboat stopped to unload the contraband into a van which was waiting for them.

"When they sensed our presence, the skipper immediately jumped into the water while the crew escaped in the van, leaving some contraband behind,” he told Bernama.

The contraband will be handed over to the Customs Department for further action.