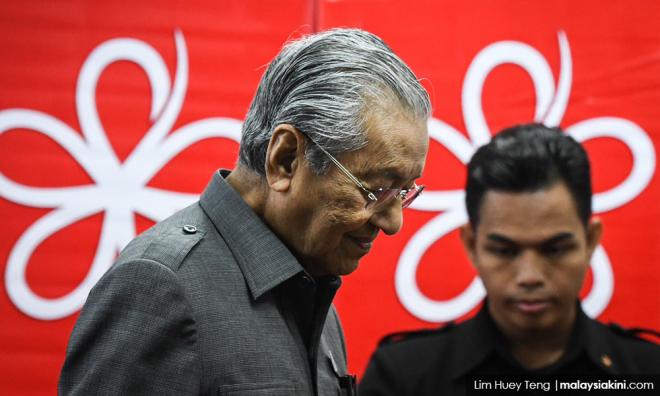 Yoursay: Dr M should focus on nation-building, not party-building

YOURSAY | ‘Mahathir has lost his sharpness, and age hasn't helped.’

Kim Quek: Right from day one, Pakatan Harapan should have focused on the economy, in view of the bumper monetary promises it made to the electorate.

How to honour these pledges if there is no rush of new investment to spur the economy that will bring in the additional income to both government and people?

On this score, the Harapan government has failed miserably. It is completely indifferent to the bottlenecks that have retarded our economic growth, much of it arising from heavy-handed state control influenced mostly by cronyistic and racist considerations.

Worse, our prime minister indulged in a personal vendetta that antagonised the two largest and most likely potential investors – China and Singapore.

And instead of placing the rejuvenation of the economy concurrently with institutional reforms on the highest plateau, the prime minister immediately prioritised inter-party political scheming within the coalition upon assuming premiership to strengthen his position for a prolonged rule, as manifested in his picking of cabinet members.

His rule was hitherto marked by continuous behind-the-scene intra-coalition and inter-coalition intrigues. His latest leap towards massively bolstering his party with defecting Umno MPs may be the last straw that spells the end of days as prime minister.

The country desperately needs a new leader to take the country in the right direction.

Drngsc: A well-written piece by PKR leader Rafizi Ramli. There is much truth here.

However, Rafizi did not quite bell the cat. Maybe he wished to be politically correct. The severe loss in approval rating for Harapan can be blamed on one man. And that is Dr Mahathir Mohamad.

It was Mahathir who chose a politically correct but performance poor cabinet. It was Mahathir who announced ratification of the International Convention on the Elimination of All Forms of Racial Discrimination (Icerd) without doing the groundwork which he knew so well.

Did he fail to plan or plan to fail, one wonders. It is Mahathir who still talks of extravagant plans like the third national car project when he also talks of austerity. Was he trying to discredit Harapan government indirectly?

It is still Mahathir who actively express his wish to take in 'frogs'. He simply fails to understand that that is just undemocratic.

In the 14th general election, those who voted for Umno actually voted against Harapan. They did not want Harapan to represent them in those seats. So by taking these ex-Umno MPs, he is going against the wishes of the people. That is simply undemocratic.

Having said that, the other Harapan parties also are to blame. They have given Mahathir and Bersatu too much say.

In trying to appeal to the Malays, important though that may be, they have neglected the voices of the non-Malays who were solidly behind Harapan in GE14. Should they also not be heard?

Why is the voice of non-Malays muted and ignored? I am not saying that we should ignore the Malays; I am saying that the non-Malays should also be heard.

If the non-Malays abandoned their parties, and Harapan fails to garner their weak Malay support, GE15 will reverse GE14 results. What is worse?

The Reformasi agenda, to work towards a new Malaysia where policies are need-based, instead of race-based, has now taken a back seat.

Mahathir is no reformer. He is an Umno thoroughbred. So the country is faced not only with a Malay dilemma, but also a non-Malay dilemma. The people they trusted and voted for seem to have betrayed them, again.

Solution? Mahathir must go. He has become a liability.

Pawancheek B Marican: This is an incisive analysis of the current mood of the people. Harapan cannot, and should not, be more Malay than Umno nor more Islamic than PAS.

Harapan must concentrate on the economic issues and deliver its promises to the people. Kudos to you, Rafizi.

Clever Voter: The Harapan government is having a tough time juggling between priorities. Its election manifesto is shredded, and it is clueless over a plan B.

Mahathir has lost his sharpness, and age hasn't helped. No one dares to talk about meritocracy, they retreat to racial and discriminatory policies. Even senior DAP lawmaker Lim Kit Siang has kept silent on this matter.

The obsession to increase Malay votes and support will backfire. Harapan coalition parties, in their haste to win support, have resorted to the tired ways of Umno. This includes factionalism that ultimately will bring back feudalism.

It is for the very reason that each of the factional parties that try to outdo one another that will bring their failure. They forget that wealth creation and management remain the very key that brought the country to where it is.

If only the opposition could reinvent itself to be a formidable party, things would get even hotter. But it's a long way before the election. That's the only saving grace.

Abasir: So long as Harapan is unable (or is it unwilling) to make the policy shift from ketuanan Melayu to ketuanan Malaysia, no amount of well-intentioned pleading will slow down the downward trajectory.

The "endless cloak-and-dagger political manoeuvres of the old Malaysia" are fuelled by that toxic ideology. Mahathir and his Bersatu are its current purveyors and flag bearers.

Fairplayer: Mahathir's job is done when he got the crooks arrested, charged and properly sentenced.

As to ministerial portfolios, he made huge mistakes by favouring Bersatu's greenhorns who knew next to nothing about what good and responsible governance means.

In arrogantly acknowledging he is a racist Malay recently, this dipped his rating further, nationally and internationally. I favoured him as prime minister over Anwar, but now I am not sure who is worse!

SVR: Yes, a good analysis by Rafizi. Immediate attention should be given by Mahathir to his underperforming ministers and deputy ministers. They are the ones that the people are depending on to improve their livelihood.

If they fail, then Harapan has failed. At the moment, only a few ministers are performing while the rest are not capable and should be replaced, but Tun isn’t doing it.

The longer he avoids this, the more frustrated the people will be and when they have lost all hope, then it will be hard to reverse their opinion of the Harapan government.

Moontime: I honestly admire Rafizi's bravery in calling a spade a spade in dealing with the current situation in this country.

Although people's expectations were initially high in the beginning, reality has set in. We know that it's not easy to fulfil all the election pledges, but at least make an effort to address them and set an action plan to make it happen.

The euphoria is now officially over and we have seen lots of criticisms and cynical remarks in social media about the Harapan government. If we can vote you in, we can surely vote you out too.

Nikki Harieti: My highest respect and salute for Rafizi’s no-nonsense, straight-to-the-point analysis. You are truly a class of your own in your own way, and above PKR deputy president Mohamed Azmin Ali.

I doubt Azmin is capable or daring enough to give his own analysis of the hard facts that are chipping away the rakyat's confidence for the Harapan government right now.

Kahlil Gibran: It took Rafizi to point this out. Why are Kit Siang and his son Guan Eng quiet? Though some may say PKR is the weakest link, that is because of the external interferences in PKR.

Why is so much importance given to Azmin and his followers by Mahathir? Remember Anwar is the president. If Harapan has not much Malay support, what can anybody do?

Anyway, the next election is in five years' time. Like Rafizi says, let's get the economy going and the promised reforms and slowly everybody will understand.

Mahathir is so focused on building his party that he has forgotten the country.

Anon: Well written and it's true. We need to focus on nation-building, not party-building.

Yoursay: Revive the economy and Malays will back Harapan