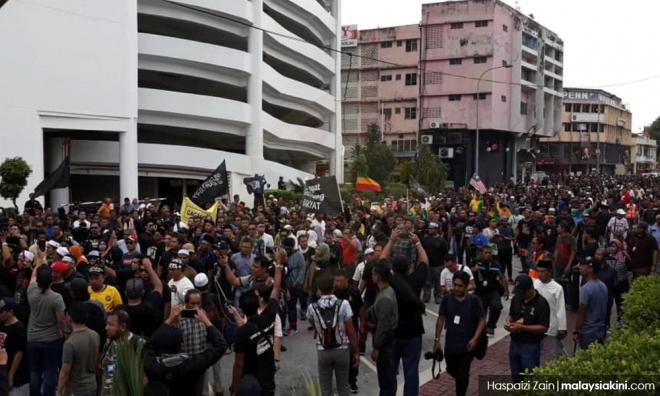 Jaringan Melayu Malaysia president Azwanddin Hamzah has threatened to attack the Klang police station if those who triggered the riots near Seafield Sri Maha Mariamman riots were not apprehended.

"My warning to them, immediately arrest the developer, arrest the lawyers.

"If not, ladies and gentleman, we will attack the Klang police station," he said at a rally urging justice for the late fireman Muhammad Adib Mohd Kassim.

Adib was part of a Fire and Rescue Department team that had tried to put out vehicles that were set ablaze by rioters.

"It began with the developer ordering payment. The people who arranged the payment were the developer's lawyers.

"This is the main witness, why have they not been arrested until today?" said Azwanddin, who carries the title "Datuk".

Police had already arrested the lawyer, who is said to be "non-practising", shortly after the riots broke out.

Azwanddin also complained about police wanting to detain him for attending a rally in Putrajaya to demand the resignation of de facto unity minister P Waythamoorthy over the riots.

"Two days ago a warrant was issued to arrest me for a gathering in Putrajaya. I did not kill anyone, I did not kidnap anyone [...] I only stood up for Malays and Islam," he said.

The rally today, attended by about 2,000 people, was organised by Gerakan Rakyat Malaysia (Geras).

The rally, among others, gave Putrajaya a 40-day ultimatum to sack Waythamoorthy.

Geras president Abu Bakar Mohamed said the demands will be submitted in a memorandum to the Yang di-Pertuan Agong.