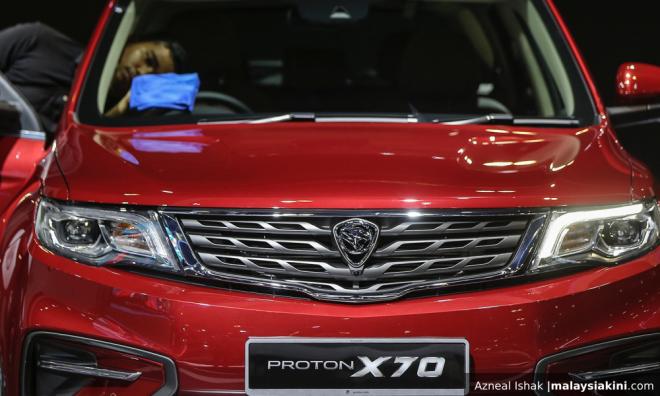 The Proton X70, the new sports utility vehicle (SUV) introduced by Proton Holdings Bhd in partnership with China's Zhejiang Geely Holding Group, has received about 200 to 300 bookings each day since it was officially launched two weeks ago.

Proton Edar Sdn Bhd chief executive officer Abdul Rashid Musa said over 60 percent of the bookings had been for the premium variant, indicating that buyers were attracted to the higher features and equipment levels and were of the opinion these were worth the extra cost.

"Strong support has continued, and this has been the best response received by Proton for a long time," he told at a media dinner yesterday.

The national carmaker has reported over 15,000 bookings after the long pre-launch campaign for its first-ever SUV model.

Launched on Dec 12, the SUV is being offered with four variants – Standard wheel drive (2WD), Executive 2WD, Executive AWD and Premium 2WD – with prices starting from RM99,800 for the Standard 2WD to RM123,800 for the Premium 2WD, on-the-road without insurance.

The prices are also applicable to Sabah and Sarawak.

The X70, which has been adapted from Geely's best-selling left-hand-drive Boyue model, will be produced entirely in China and imported as completely built-up (CBU) units into Malaysia.

Proton and Geely plan to start manufacturing the right-hand-drive (RHD) version at Proton's existing plant in Tanjung Malim, Perak, as completely knocked down (CKD) next year with an investment of RM1.2 billion.

Abdul Rashid said while the Tanjung Malim plant was being upgraded as RHD production home for the SUV, Proton could sell as many X70 CBU units as allowed under approved permits while waiting for the CKD line to be ready around October 2019.

The X70 was equipped with mobile communication technology, an advanced integrated cockpit information system which offered multiple user functions as well as the ability to stay connected to a mobile device.

Through an embedded eSIM card, the X70's system is preloaded with four apps offering services such as online music streaming, navigation, weather forecast and voice recognition.

Proton is offering X70 buyers special value-added packages which include free parts and labour for the first service as well as free labour for five scheduled service appointments within 100,000 kilometres or five years.

The company would also offer low-interest rates starting from 2.34 percent per annum for qualified buyers, unlimited mileage warranty for up to five years and one gigabyte monthly Internet data for five years.

"New bookings for X70 will stand a chance to receive the car within two to three months from the order date, depending on the variant and colour chosen," added Abdul Rashid.