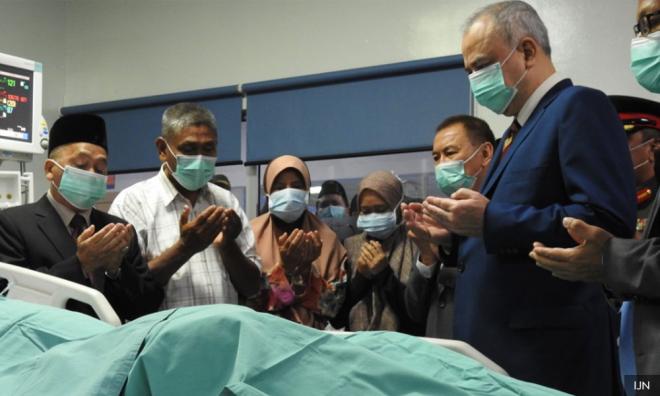 Deputy Yang di-Pertuan Agong Sultan Nazrin Shah fought back tears today as he recalled the tragic death of a firefighter who was severely injured in the line of duty last month.

Expressing sadness over the death of Muhammad Adib Mohd Kassim, 24, who was severely wounded in the riots at the Seafield Sri Maha Mariamman Temple in USJ 25, Subang Jaya, on Nov 27, the sultan praised the firefighter as a distinguished, courageous and commanding hero who died in the service of the nation.

Sultan Nazrin Shah, who is the Sultan of Perak, said justice must be meted out in the case of Adib and those responsible for the cruel crime should be brought to justice and punished.

“The whole country, regardless of race and religion, from the ordinary people to the palace, mourns the loss suffered by the family of Muhammad Adib. All efforts must be made to find those who committed the cruel crime that led to Muhammad Adib’s death and brought grief to his family.

“In upholding the truth, those who witnessed the incident have the religious, moral and legal responsibility to come forward and assist the police investigation. A crime as cruel as this cannot be covered up.

“We shall ask God for poetic justice. We shall ensure that the guilty will be punished for their sins,” the sultan said as he fought back tears.

Sultan Nazrin Shah, who began a two-day visit to Penang yesterday, was speaking at the presentation of instruments of appointment to members of the Penang Islamic Religious Council and judges and registrars of the Penang Syariah Court.

Recalling the temple riots of Nov 27, he said that Malaysia, a multiracial nation of people with mutual respect for one another founded by the late Tunku Abdul Rahman Putra Al-Haj, had, for a moment, lost the sense of humanity that it had nurtured for so long.

“The law was discarded by the people who resorted to violence, driven by prejudice and emotion,” he said.

Adib succumbed to his injuries on Dec 17 at the National Heart Institute in Kuala Lumpur. An inquest is to be held to determine the cause of his death. Some people claim that he was injured in a vehicle accident during the riots while others allege that he was assaulted by rioters.

Sultan Nazrin Shah added that the country would be peaceful and the people can live in harmony so long as everyone adhered to and respected the law.

However, when the law is discarded and the people opt for strength or advantage by using position, wealth, violence, corruption, lust and deceit, then many innocent people will become the victims, he said.

At the event, the sultan presented the instruments of appointment to 14 members of the Penang Islamic Religious Council and 25 judges and registrars of the Penang Syariah Judiciary Department.