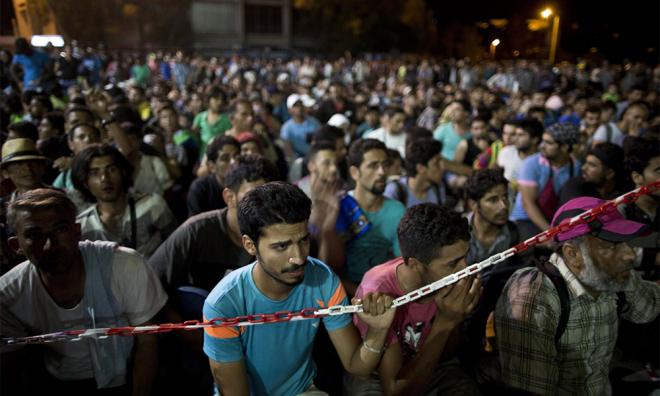 Two top Malaysian corporate leaders are reaching out to refugees from war-torn Syria who have made Turkey their home for the past six years.

Berjaya Group founder Vincent Tan and Top Glove Corporation Bhd founder Lim Wee Chai are in Istanbul on a special three-day mission with 25 volunteers to distribute aid to the refugees.

There are four million Syrian refugees in Turkey with 700,000 in Istanbul alone.

Both Tan and Lim are also accredited volunteers of the Tzu Chi Foundation, a Taiwan-based humanitarian relief organisation which has footprints in 57 countries, including Malaysia, and has extended aid to almost 100 countries since its formation 52 years ago.

The Malaysian volunteers spent Friday at a clinic and later a school for refugee children run by Tzu Chi in downtown Sultan Gazi district.

In Malaysia itself, Tzu Chi has 1.2 million members who contribute a minimum of RM5 monthly with some 1,000 volunteers.

Tzu Chi's core value is love and compassion and members have to undergo a two-year training to qualify as a volunteer.

Its operations in Turkey are managed by three Taiwanese, including a couple, Faisal Hu and wife Nadia Chou, both Muslim converts, assisted by over 300 Syrian-born volunteers.

At a briefing for the visiting Malaysian team at the clinic, Faisal said the well-equipped centre had treated about 270,000 patients since it opened its doors in July 2016, averaging between 9,000 and 12,000 people monthly.

Later at the El Menahil International School, the volunteers were warmly welcomed by teachers and students who are streamed into elementary, primary and secondary classes numbering 2,000.

Faisal, who has lived in Turkey for 23 years, said the school started with over 500 students and its education model was later adopted by the Turkish Ministry of Education and Unicef for other schools, benefitting 350,000 children of Syrian refugees in other parts of the country.

Tan presented various forms of donations to the school, while Lim handed over boxes of rubber gloves for the clinic. Top Glove Corporation, of which he is the chairperson, is the world's largest manufacturer of rubber gloves.

Tan told the students, teachers and volunteers: "I'm very proud of you all for what you are doing and I admire you all."

The poignant moments in the sessions with the Malaysian delegation came when some refugees spoke of their hopes for the future of their homeland.

Najwa Muhammad Khalf, a 16-year-old girl who lost both legs in a bombing in the ravaged city of Allepo, said all the other 11 members of her family were killed, while she was rescued by relatives and crossed the border to Turkey some 1,200km away.

She has since been fitted with prosthetics.

When asked what message she had for the warring factions in Syria, she said: " Stop the war."

Asked what he thought were in the minds of people who caused the prolonged war, he bravely said: "They don't have a mind. All Syrians want a new future and we want to go back."

Taleb Aljadaan, 44, a teacher at the school who fled to Istanbul five years ago, said all that he and fellow refugees wanted was for a settlement to the Syrian conflict.

When asked how long more would peace return to Syria, he said: “I believe in three years, we can go home."

The Malaysian mission is expected to tour other relief centres on Saturday to distribute more aid.