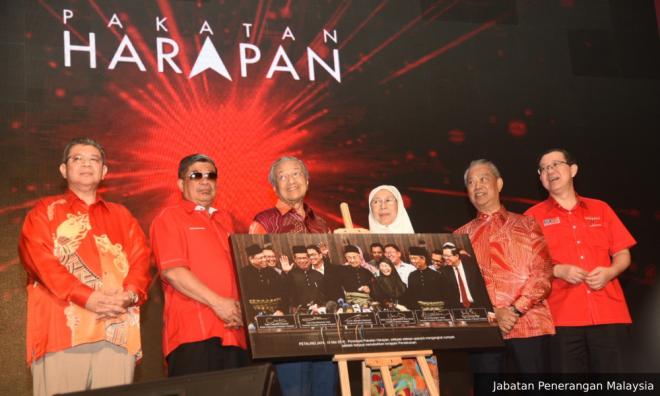 COMMENT | “In the midst of chaos, there is also opportunity.” Indeed, Sun-Tzu’s turn of phrase is apropos of the moment, as the source of this chaos is from the West.

The US stock market is in freefall, the government is in shutdown, and the president is unhinged. Talk show pundits are howling in unison about a next global crisis.

When we look at global risks for doing business, we can go through the checklist and see that uncertainty is ticking up and down the line: failure of global leadership (check), energy price volatility (check), fiscal crises, cyberattacks, social instability, financial institutions, infrastructure, good governance, terrorism and widespread unemployment of unskilled workers (check, check, check).

The biggest clandestine threat is the evaporation of the middle class across the developed world. In the past, the very definition of a banana republic has been the subjugation of society by a select and corrupt elite. This no longer applies only to the so-called Third World, but also to global economic giants.

This is not the result of chance or free market forces, but rather the consequence of assertive policies designed to keep benefitting the super-rich so that the disparity between haves and have-nots has increased to the point where we have, today, two vastly different human experiences on the planet – that of the cocooned bubble of wealth, and the day-to-day grind of the rest of society.

Fully half of Malaysians live on less than RM2,000 a month, with rural Malaysians earning up to 40 percent less. Compare this to the billions squandered by Umno-BN leaders and their lackeys in the 1MDB scandal alone.

To make matters worse, food and fuel price increases, GST and the 40 percent hit to the ringgit over the last five years have all contributed to the cost of living increases affecting the middle class.

From the day of the election, we highlighted that the first priority of the new Pakatan Harapan government must be to support the ringgit by increasing investor confidence while concurrently reducing the debt.

We have aggressively pursued this policy with allies like Japan, in particular, even securing an RM7.6 billion, 10-year samurai bond at an attractive 0.65 percent interest rate to pay down our sovereign debt.

The smooth transition of power, and immediate action to call to account corrupt actors from the previous administration – right up to the former prime minister – should be confidence boosters to investors, domestic and foreign alike. And the recall of our capital home from outbound investments in Manhattan, Mayfair and Beverly Hills should help stem the tide of pressure on the ringgit.

Still, while the rest of the world frets about a freefall in 2019, we have reason for hope. Malaysians score high on comparative quality of life indices, taking into account factors such as purchasing power, safety, healthcare, pollution and climate.

While the G7 struggles with economic and social challenges, we can 'Look East' to trading with Asean – 550 million people growing at five percent annually.

And although Chinese investment in mega infrastructure projects may take a breather, countries such as Japan and Germany are eager to step in to offer us world-beating technology combined with efficient capital and reliable execution, to help us achieve the targets of Vision 2025.

In many ways, we have a lucky country ‘problem’ – a large land mass with a low population, a wealth of natural resources such as oil and gas and palm oil, hard currency-earning sectors such as tourism, harmonious diversity among the communities and a working democracy.

All we had to do was govern the country honestly, administrate justice fairly, and legislate for the good of all citizens. Though we have failed on these counts in the past, it is Harapan’s intention to work to now rectify these deficiencies.

I started my journey in politics on the day Muhyiddin Yassin was sacked for speaking the truth against corruption, malfeasance and massive abuse of power.

I fought a valiant battle, fearlessly against the kleptomaniacs, was arrested, interrogated (albeit in a friendly manner) and was released on police bail.

I was involved deeply in the formation of Bersatu and worked tirelessly with many to form Harapan against all odds. I was never a politician, not even a reluctant one. I took this challenge as I honoured and respected immensely the sacrifice made by many, especially Muhyddin at his pedestal of power.

Every beginning has its rightful ending. I would like to wish all Malaysians a big thank you for giving the latitude to Harapan to govern and resuscitate Malaysia. May the new year be a different and better year for all.