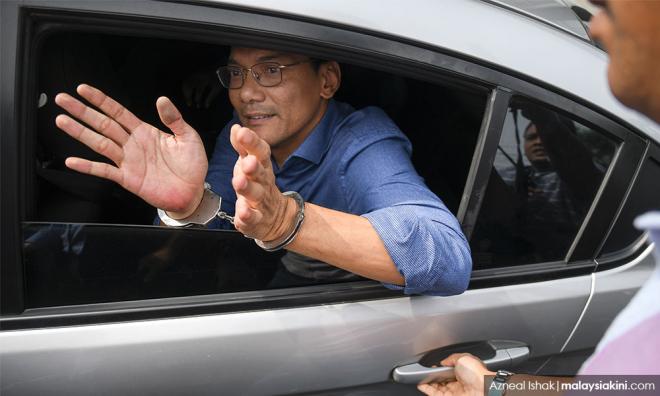 YOURSAY | Get rid of race-based politics and everything may change.

Clever Voter: Every now and then, we have one brave soul who would shoot from the hips. Comments from this man (Jaringan Melayu Malaysia president Azwanddin Hamzah) are uncalled-for but it is the easiest and cheapest way to get publicity and perhaps fame.

Azwanddin did what others did before him. He is merely taking advantage of the practices and habits of racist institutions that Pakatan Harapan finds impossible to dismantle.

He may be arrested - but every minute there will be another Azwanddin and the like that surfaces. Get rid of race-based politics and everything may change.

In short, this man will not be the last. Indeed, he's one of those irritants that just refuse to go away.

The Red Baron: Every race and every religion have their fair share of uncouth racist bigots.

Unfortunately, in Malaysia somehow, almost 50 years of special rights allocated to one particular race has emboldened the lowest form of life among them to spew insults, threats and bully the minorities openly.

The 'ketuanan' belief in this particular idiotic imbecile, who incidentally is another 'Datuk', has emboldened him to publicly insult a cabinet minister just because the minister belongs to another race and religion.

Only in this nation have we produced hundreds, if not thousands, of ‘ketuanan datuks’ who are thugs, gangsters, thieves and looters who have robbed every public institution, including Tabung Haji, on the pretence of sacrificing for race and religion, and mind you not a single protest, rally or regret by them when found out.

Roger 5201: Azwanddin would do well to remember someone paid RM150,000 to a bunch of ‘samseng’ to create the Seafield temple ruckus.

Instead of playing the race card, he should get his facts right first, instead of pointing fingers at ministers Teresa Kok and P Waythamoorthy.

It is never a good idea to hold a race rally when the investigation into firefighter Muhammad Adib Mohd Kassim's murder is not completed.

Azwanddin should not have threatened the police and insulted a minister with expletives based on his conjectures.

This is not ‘ketuanan’, this is intimidation!

Quo Vadis: He should be dealt with swiftly, according to the law and with due process.

How the police and the courts deal with him will be a deterrent to like-minded extremists, whoever they are and whatever connections they can call upon. There is no option.

SuperPapaGenius: I seriously think he knows he will be arrested. He is prepared to be collateral damage.

He knows his job is not to lead. His job is to instigate - to sow the seeds of hatred. That may be the modus operandi of the masterminds.

Sow the seeds of hatred, stand back and watch a whole generation go amok with hatred.

Ipohcrite: This is what the supremacists of ‘ketuanan Melayu’ will resort to - threatening the peace and the system of democracy, and destroying the institutions of law and order.

But only if good people do nothing. Such subversive elements should be brought to book to face the full might of the law. Pronto.

Malaysi Pahatian: "(Lawyer) Mohd Imran (Tamrin) added that he is concerned about Azwanddin's medical condition as he has thyroid and needs to take regular medication."

So what? If his condition is such, stay at home and relax with his family members, and take his medication regularly. Instead, he got the time and energy to be involved with a mob group and issuing threats.

By uttering that he and his mob will attack the police station is as guilty as perpetuating the actual crime. Charge and convict him and then put him behind bars.

The rule of law must prevail, and the guilty ones should be punished accordingly. No ‘abang-adik’ or Muslims can do no wrong, please. This is a new Malaysia.

Malaysian-United: "The word 'attack' has a broad interpretation. As an activist and an individual, Azwanddin does not possess strength or the facility to literally attack a police station," said Azwanddin’s lawyer Mohd Imran.

What a lame defence. In that case, I am allowed to run around with my fists up in the air and in a threatening manner scream that I want to "attack" anyone I meet, and in my defence, say I didn't mean “attack” like to kill someone but "attack" everyone with love, hugs and kisses.

Stupid. Someone should "attack" him and see what he thinks.

Anonymous_b3cdcd05: Imran is barking up the wrong tree.

Maybe the word "attack" has other connotations but considering that the gathering was to milk Adib's tragic death for political gains and threats against the Harapan government and taking into account of Azwanddin’s reputation, it had only one meaning.

Ask any schoolboy and he will enlighten Imran on its meaning in the context used by Azwanddin.