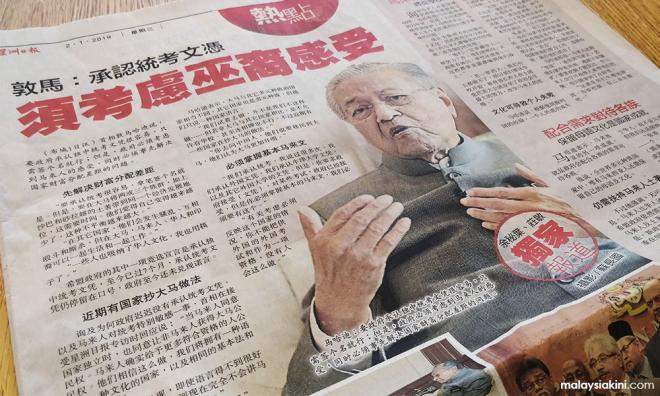 What did Mahathir say about the UEC?

Prime Minister Dr Mahathir Mohamad's recent interview, which touched on the recognition of the Unified Examination Certificate (UEC), has sparked uproar in the Chinese community.

The interview was published by Sin Chew Daily today under the title: "Tun Mahathir: The recognition of UEC needs to consider the feelings of Malays."

The UEC is an examination taken by students in Chinese independent schools.

The report has since been picked up by other agencies, including the Borneo Post under the title "Feelings of Malays must be considered in recognition of UEC," and The Edge Markets with the title "UEC recognition has to consider Malays' feelings: Dr M."

Following this, MCA today questioned the position of DAP leaders on Mahathir's interview, and asked if the prime minister had taken into account the feelings of the Chinese community.

Malaysiakini contacted the Prime Minister's Office (PMO) to respond to the matter. The office subsequently sent a copy of the recording of the interview.

A transcript of the recording with regard to the question on UEC is reproduced below:

But you are asking this to be accepted by the government. To a certain extent, this has already been accepted, but you must have the basic mastery of the Malay language. You see, you must have that.

And the exams should reflect the situation in this country. You can't take a foreign examination from a foreign country and use that as a qualification. Nobody has done that.

Reporter 2: Tun, actually I'm a UEC holder, I studied in a Chinese independent school. I think the History syllabus was quite contravative (sic) because some of the history we learned is from outside the country, such as, we learned the history of China, world history, but we also studied Malaysian history and we studied the history of Southeast Asia. We are curious why the government until now can't recognise UEC and why the Malays are so sensitive (about the matter).

Mahathir: Well, the Malays when they agreed to independence, they agreed that non-Malays must also be given citizenship, and indeed they gave more citizenship than people who are qualified, but they believed that by so doing, we will have a country with one language, one culture and basic laws and understanding that are all very Malaysian.

But they found that even the language (inaudible) and all that was not very well supported, and many people until now cannot speak Malay at all, and yet we accept them. I think how much more do you want to ask them to accept?

This country is quite different from other countries. Other countries have got multiracial people, but they speak one single national language.

Reporter 2: So, will Pakatan Harapan's objective to win over Malay support make its promise to the Chinese community harder to achieve, such as this UEC?

Mahathir: Ya, but we try to meet (the promises), it is not that we don't. You make a comparison between Malaysia and its neighbours. In other countries, they don't allow Chinese schools, they don't allow even signboards sometimes. It is recently only they copied us.

Even if you ask people of Chinese origin in some of these countries, they would like to migrate to Malaysia. They say here they are much more acknowledged as their ethnicity is recognised.

Reporter 1: So Tun, will you give your assurance to the Chinese community the Pakatan government will recognise the UEC, can you give the assurance?

Mahathir: Ya, I think we recognise it to the extent that we can. Look, there are differences – one of the worst differences is the disparity in the distribution of wealth in this country that we have tried to correct.

I admit many of the faults are with the Malays but this one (economic disparity) you don't correct, and you are always correcting this one only (UEC).

This one is very simple for you to correct – the language or UEC or whatever. That is very simple. That is a stroke of the pen and it is done. But to bring the three races in Malaysia plus the bumiputera in Sabah and Sarawak to the same (level of) economic development takes time.

You know, they feel they are getting less and less. The disparity is not getting less, it is getting more simply, because when we started, it was estimated that the Malays had two percent of the wealth, the Chinese had 30 percent and the Europeans (and) foreigners had about 40 percent.

Please remember that in other countries, they riot and they fight, they kill. But in Malaysia, Malays, Chinese and Indians can live and work together. We even absorb some of your cultures, now we use chopsticks.

Reporter 3: But Tun, the government has been helping the bumiputera for more than 60 years, including (during) your time. Why can you still not meet your target or objective?

They must work hard, as hard as the Chinese. They must understand that in business, it is important to be honest, to pay your debts – all those things need to be reimplanted into them.

My view is that... my observation travelling all over the world is that people succeed or fail not because of race or colour or whatever, or whether they are living in temperate or tropical countries. They fail because of different cultures. For example, Eastern Europeans are not as advanced as Western Europeans, their culture is different.

We see, for example, the Japanese, the Koreans, they are doing well and now the Chinese have become the second biggest economic power in the world. That is related to their culture. The culture of the Chinese - 4,000 years of culture, versus the culture of the Malays, which is basically 600 years old, is not the same and it is because of that that they fail.

The opportunities are there from the very beginning. I am, well, 90 years old and for 70 or 75 years, I have observed the Chinese who came here when I was a boy, they were very poor, working as coolies. (Genting founder Lim) Goh Tong was a coolie, nothing. But their culture drove them to work, to do business and all that, and they succeeded.

Today, they are no longer rickshaw pullers. When I went to school, (I was) being pulled by a Chinese man in a rickshaw... Those days (when) they came, they were very poor, but their children and grandchildren have done very well.

Why they have done very well is of course, because Malaysia offered opportunities for them – at the time, China was in shambles – and they did very well because they seized the opportunities... but the Malays, their culture is laidback.

For example, I told the Malays if there is tin in the ground under your house, you have to dig it before you become rich, but you would rather ask the Chinese to dig it and receive a little bit or something. That is why you fail. You must dig, you must do it yourself.