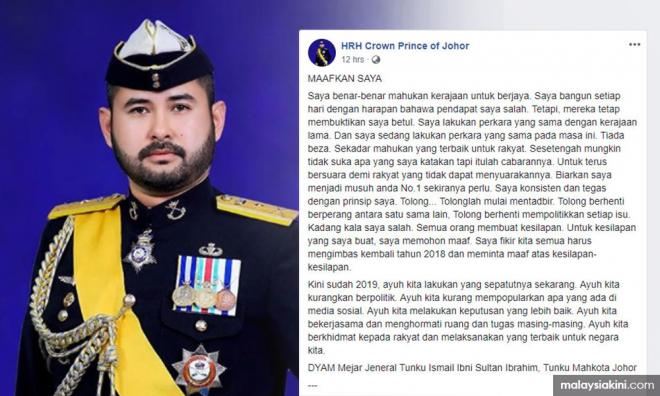 Johor Crown Prince Tunku Ismail Sultan Ibrahim said he is willing to be public enemy number one if it means speaking up for the people and pushing the government to get its act together.

"I really want the government to be successful. I wake up every day hoping to be wrong. But, they keep proving me right.

"I did the same with the old government. And I’m doing the same now. No difference. Just want the best for the people.

"Some may not like what I say but that’s the challenge. To keep speaking up for the rakyat who can’t. Let me be public enemy number one if I have to be," Tunku Ismail posted on Facebook last night.

He urged the government to start governing, stop fighting among themselves. and stop politicising every issue.

Tunku Ismail also apologised for any mistake he may have made in the past year.

"Sometimes I get it wrong. Everyone makes mistakes," he said.

Tunku Ismail said 2019 is the year for everyone to "get it right" and make better decisions.

"Let’s cooperate and accept each other's space and duty. Let's serve the people and deliver the best for our country," he added.

Prior to voting the 14th general election, he had made veiled swipes at Bersatu chairperson Dr Mahathir Mohamad - who is now prime minister.