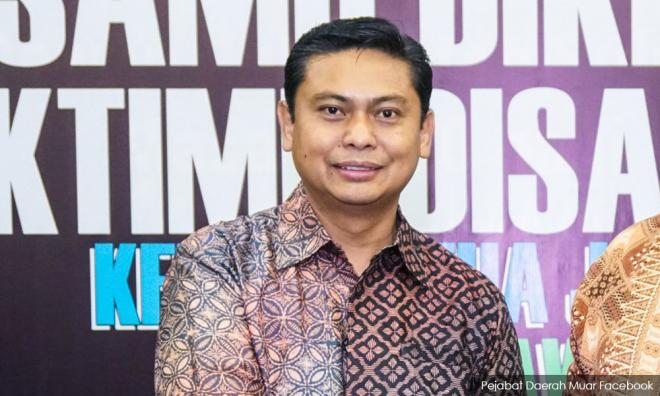 In a new development of the Muar kickbacks scandal today, the district office said the 30 percent commission sought in the incident was a profit margin, and not bribe.

Muar district officer Haffiz Ahmad said contrary to an initial report on the matter, the individual who sought the commission was not an officer for Muar MP Syed Saddiq Syed Abdul Rahman.

Instead, Haffiz said the individual was a representative for an independent supply company appointed by the Muar district office to handle an MP's office allocation warrant from the Johor Federal Development Office.

The warrant was to supply items to a Chinese school.

Haffiz said the school had mistaken the representative as being from the Muar MP's office.

"Coincidentally, their discussions did not go smoothly as the school asked for items the value of which exceeded the allocation, while the company was unwilling to do the supply works as they would not get profit - a maximum of 30 percent - if they followed the school's request," he added.

He elaborated that the profit margin is up to the discretion of the supply company and the warrant recipient after all items are agreed to in accordance to procurement procedures.

Earlier, a Chinese daily reported that a man claiming to be an aide to a lawmaker in Muar had requested kickbacks from the boards of directors in local schools for procurements funded via constituency allocations.

The report said several Chinese primary schools and secondary schools approached by the man were asked to sign documents that allowed him to receive a 30 percent kickback.

It was learned that several school representatives had signed similar documents.

The report also included a text message conversation between the man and a representative from a parent-teacher association (PIBG) as evidence.

In one case in December 2018, the man was said to have requested a 30 percent kickback from a procurement totalling RM20,000 to get new chairs, desks and other equipment for pupils.

The daily quoted a source claiming the man was being probed by the authorities.

Meanwhile, Syed Saddiq's office has filed a police report over the matter, denying any link to the incident.

Separately, Johor DAP chief Liew Chin Tong said no aide for its assemblypersons or MPs have been involved in seeking commissions from allocations to Chinese schools.