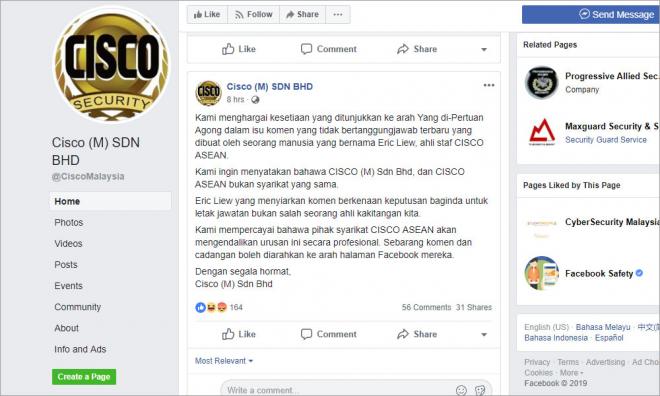 We're not the Cisco you're looking for, security firm tells netizens

The security firm issued a statement through its Facebook page today after some netizens had apparently confused the names of the two similarly named companies.

“We tried (clarifying). We really did. Now our phones won’t stop beeping,” it added in the comments section on the same Facebook post.

In its statement, the company clarified that Cisco (M) Sdn Bhd and Cisco Asean are not the same company.

In addition, it said a person who allegedly made insulting comments regarding the former Yang di-Pertuan Agong Sultan Muhammad V is not the company’s staff.

“Cisco Asean” refers to Cisco Systems’ Asean region Facebook page, which has been inundated with angry comments from netizens regarding the alleged insult against the former king that was supposedly made by one of its Malaysian staff members.

According to their website, Cisco Sdn Bhd offers physical security services, including armed and unarmed guards.