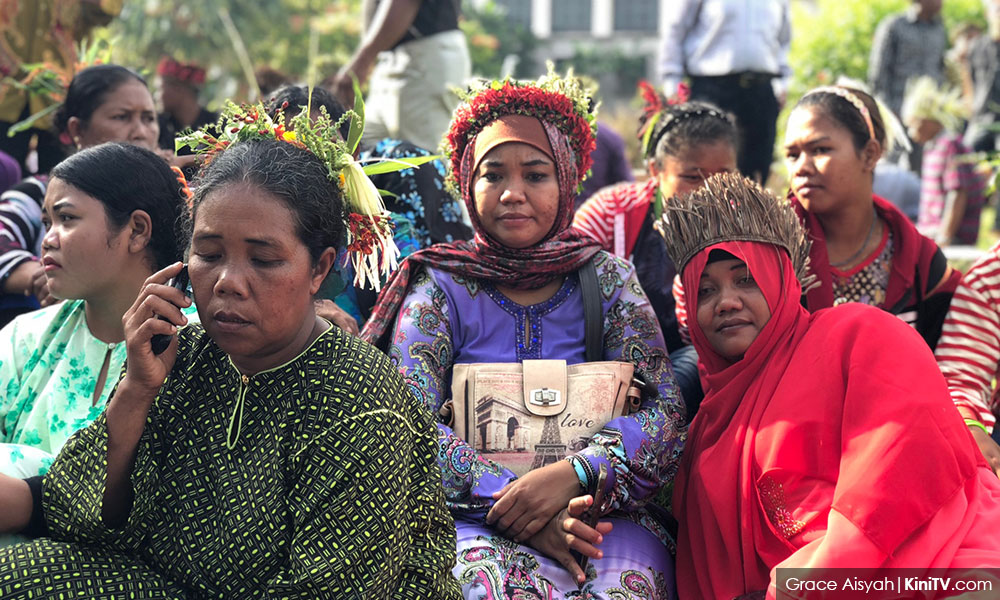 YOURSAY | ‘Let's hope that this is not just for the Cameron Highlands by-election.’

Cogito Ergo Sum: The forgotten, neglected and taken for granted, the Orang Asli’s socio-economic state is a testament to BN’s selective programmes. It is time to redress this issue and right the wrongs of 60 years of oppression.

We are no better than many advanced countries who have neglected and persecuted the natives of the land.

This community has been disenfranchised from the very lands they owned from time immemorial. We need to undo this deliberate subjugation of our native people.

YTMQ: The sidelining of Orang Asli interests began since the tenure of fourth prime minister Dr Mahathir Mohamad. And if you go to Kelantan, the PAS government is far worse. There, it's the worst kind of racism.

Let's hope that Harapan leaders would really embrace this issue of Orang Asli welfare, and not just for the Cameron Highlands by-election.

SAC: DAP is only taking interest in Orang Asli issues now because there is an election. Before this, hardly has DAP ever championed the Orang Asli plight.

When DAP was in opposition, when did they ever fight for the interest of Orang Asli?

Not Convinced: SAC, could it be because DAP and other opposition parties were stopped by then Umno government from going into Orang Asli areas?

Didn’t we hear about then opposition parties complaining that they were blocked from going into the longhouses and villages by Orang Asli chiefs who were in the pockets of BN?

Redmann: The tone, tenor, if not power of Article 8(5)(c) of the Federal Constitution guarantees the original peoples of the peninsula (Orang Asli) rights better than that earmarked for those with their "special position" plight per Article 153.

The unfortunate thing about it all is that nobody has cared since 1957. The question now is: what is Harapan prepared to do for them other than converting “roti canai” roads to “chapati” roads or “toasted bread” roads if there is such a thing?

Instead of pandering to International Convention on the Elimination of All Forms of Racial Discrimination (Icerd), Harapan should have picked the United Nations’ Declaration on the Rights of Indigenous Peoples.

Shahzamani: After winning Cameron Highlands, Harapan must rehabilitate this tourist resort. It has become so pathetic, filthy, congested and unsightly that I wouldn't waste time going there for a break.

It must be restored to its charming past.

Anonymous_cdb4fb5d: Indeed, Cameron Highlands is a corrupted kingdom of its own controlled by BN warlords. Rampant illegal clearing of hillslopes to plant vegetables to make money goes on bravely under the nose of the corrupt authorities.

During the holiday season, the hotels hike up their rates up to triple of their normal rates. Illegal parking or double parking creates massive traffic jams. Enforcement is zero.

Kangkung: There were leakages during the previous government and hopefully these leakages will be a thing of the past now.

Apart from plugging these leakages, it is equally important for the government to monitor contractors given development projects.

In rural areas, like in Orang Asli villages, or in Sabah and Sarawak, there is little or no monitoring of contractors because officials have a lackadaisical attitude.

And that is when you get the 'roti canai' roads or worse, they become 'thosai' roads, with lots of potholes in a short time.

Some holes are big enough for a buffalo to fall in. Okay, that's an exaggeration, but the roads are really bad. Potholes everywhere!

JBKing: Orang Asli are aboriginals. You have to first understand their way of life. They move house more often than we do and amenities built for them will be wasted if once they moved to another part of the jungle.

Also, if we resettle them in a particular area, their sources of food become depleted. We have therefore to give them cash or else they will have to abandon the settlement. If cash is used to make them stay, then they will become cash dependent which becomes a problem.

They have survived happily in the jungle and my opinion is to leave them and the jungle alone.

In all cases of resettlement of aboriginals, there is an ulterior motive – that is, to clear the jungle and/or take the land for quick gains by greedy politicians - and the country ends up with a net loss.

Although I am a DAP supporter, I suggest that Lim Kit Siang and his party members lobby for the jungle to be left untouched instead of playing politics and wasting public funds.

Chrysḗ Chersónēsos: Yes, we should provide them with good education and basic amenities, and let them choose how they want to live - just like any other Malaysian.

Best is to go see first-hand for yourselves, Harapan politicians and workers, and go live among them for a few months to a few years. Have you got what it takes?

Anonymous_1529214566: I agreed with Suresh, why the whole range of activities and visits are made during or just before a by-election? Should these not be done all year round?

ChuenTick: In an ideal world, the Orang Asli convention should take place after all the groundwork has been completed. Yes, the timing suggests that it is planned as part of the by-election campaign strategy.

We do not live in an ideal world, so I hope at least some benefits to the Orang Asli will be tangible after the convention.