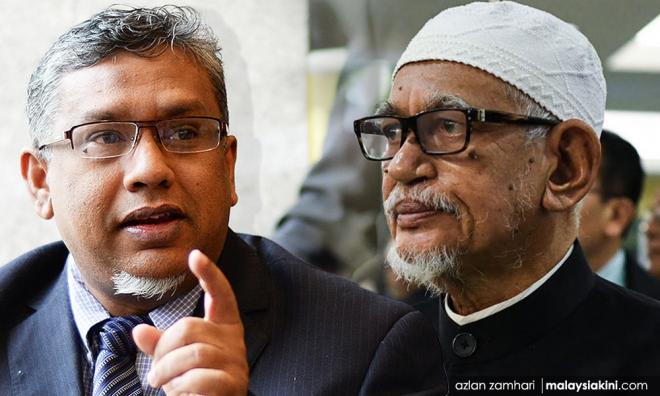 De facto Deputy Law Minister Hanipa Maidin today criticised a "religious scholar", arguing that his published opinion on the rule of law from an Islamic perspective has fallen short.

While Hanipa in a statement did not mention any name, he made clear references to PAS president Abdul Hadi Awang's lengthy opinion piece which was published on his official Facebook page yesterday.

"There is a religious scholar who wrote quite at length about rule of law with the title 'Rule of Law: Di mana Allah? (Where is Allah?)'.

"In all honesty, I did not see an academic discussion about the rule of law, even from the perspective of Islam," said the Sepang MP.

"However, I could imagine how impressed his fanatical followers would be with the article.

"The culture of fanaticism could destroy the intellectual spirit," warned Hanipa.

Among others, Hadi in his piece claimed that many Muslims who spoke and wrote about the rule of law had failed to incorporate elements of their faith (tauhid) in the implementation of various laws.

In calling for upholding a rule of law that is guided by Islam rather than Western values, Hadi had urged for Prophet Muhammad to be the role model of law-keeping, including forsaking revenge by pardoning those who repented.

"Don’t ever take the infidelic West as an example, because the best of them will still end up in hell, since their kindness is without any faith to Allah and the end times," he wrote.

"If the one leading is a Muslim, even if he were cruel, at least (others) can become cattle herders.

"But if the one who leads is a non-Muslim, even if he were the kindest, (others) can work however they wish (but) without any limit of what is halal and haram they will still end up in hell," Hadi warned.

Commenting further, Hanipa said he was puzzled by Hadi's remarks, as the Prophet Muhammad himself had once ordered his followers to seek refuge in Abyssinia (present day Ethiopia) which was at the time said to be under the rule of King Negus from the Christian Kingdom of Aksum.

"Do we want to summarise that Muslim countries that persecuted the Muslim scholars are viewed as upholding the rule of law because Allah's 'name' could be seen everywhere around the country?

"And the Western states that protect the Muslim scholars are seen as not upholding the rule of law because they are not led by Muslims?

"Maybe that is so because at one time this country with a Malay/Muslim prime minister and Malay/Muslim attorney-general, no 'real culprits' behind 1MDB were charged.

"But in that country where there is 'Hollywood' the 1MDB 'culprit' could not sit still (for fear of action)," said Hanipa, ending his jibes at Hadi on a sarcastic note.