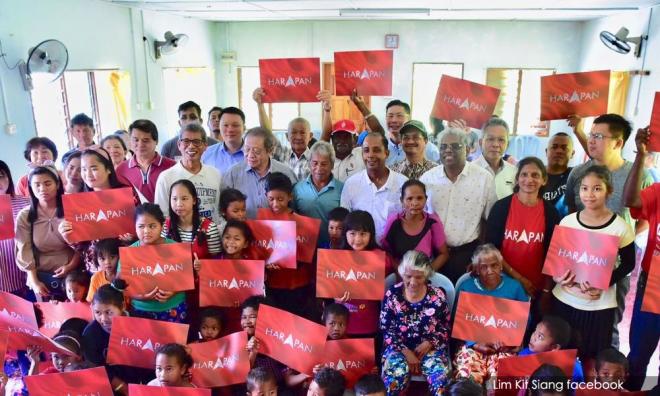 YOURSAY | ‘No one in their right mind would want anyone to think less of the Orang Asli.’

Albert Ponniah: Pakatan Harapan candidate for the Cameron Highlands by-election, M Manogaran - by trying to be smart, you gave a helping hand to your expected opponent.

No one in their right mind would want anyone to think less of the Orang Asli. They were the first sons of the soil and you have lent yourself to being seen as downgrading the community in trying to whip your possible opponent Ramli Mohd Noor, an Orang Asli.

Rather than trying to be smart, you should try to apologise. Ramli, or whoever opposes you, will take this to town.

Put up your best defence - that you have high regard for the Orang Asli. Be proactive now and neutralise it before it becomes a weapon against you.

To avoid dragging DAP or Harapan into this, you should declare that this was your personal off-the-cuff remark.

From what I heard and know, you are a nice guy. Admit your mistake, however minuscule it may seem to your supporters.

Quigonbond: Manogaran, what the hell have you done? What you said will come back and haunt you.

It's worse now that you attributed it to parroting sentiments from the ground. Don't you have a mind of your own? The fact that you are prepared to say what they think means you somewhat agree with them.

You sound like the former BN government, whose political calculations are explicitly based on racial lines (Malays won't go all out to vote an Orang Asli candidate) instead of taking an inclusive approach as New Malaysia should.

It also sounds like you have possibly embarrassed the Malay voters who apparently "don’t even" buy ‘kuih’ (cake) from Orang Asli, and you've also offended the Orang Asli.

Even before nomination day, you have potentially lost 54 percent of votes. Even if all the Chinese and Indians vote for you, it'll be an uphill battle for you to win.

People say the third time is the charm. I say maybe because of your own doing, three strikes means you’re out, not just from Cameron Highlands, but DAP. You're beginning to be a liability to them.

The best thing you can do now is to stop making excuses, apologise to everyone, say you will welcome any contest, and just focus on positive messaging.

Cogito Ergo Sum: After fighting two elections in Cameron Highlands, Manogaran, you still don’t get it. The DAP has fought for a place for everyone. And you go about your analysis based on race. How stupid is that?

I think you should be replaced immediately so that Harapan will have a fighting chance to win Cameron Highlands. If you lose this, it will be a turning point for Harapan’s future.

Jagara: Manogaran is a great disappointment. What silly arguments.

There is no hope for DAP or Harapan. We just received the lesser of two evils when we voted for Harapan. That's about the most we can get.

There is no hope for this sad, racially divided country that has been torn apart by racialist politicians.

LoveMalaysia2: Manogaran’s comments, no matter how truthful, leave a bad taste in the mouth. Stating such rampant racism exists without condemnation is very remiss.

All this talk of only MPs in Harapan being able to ensure development is also misplaced. It didn’t happen when the people voted for BN, so why should it be different now?

The candidate really needs to think before he speaks.

Anonymous: Poor argument, Manogaran. I would have thought that a DAP candidate would be more tactful and strategic when giving political statements.

Jasmine: Manogaran speaks just as any divisive and selfish politician would. There is no hint of a wannabe Malaysian leader with vision for the most marginalised community in our country.

His perceived strength comes from the ruling federal government. He seems to understand and acknowledges that extremely well. By that logic, he or any other Harapan candidate should win. The sons of the soil have no choice.

But has he asked himself this: what has he got in him personally that will make the Orang Asli favour him over anyone else?

Yes, any politician outside of BN, especially MIC in this case, will seem an angel and a gift to the voters of Cameron Highlands. Manogaran needs to understand that.

'Kuih' analogy: Manogaran now says he was only citing views on the ground

Wayan: Is this damage control? It’s a bit too late for that, I think.

It’s better that you keep quiet until it’s time for you to canvass for votes from the ground. Otherwise, you will suffer from self-inflicted damage.

Worldly Wise: Manogaran comes from a non-communal political party. All his comments must be non-communal. He could focus attention on the achievements of the Harapan government from May 9, 2018 until now.

Harapan has appointed a top lawyer as attorney-general, who has advised suing a bank in US against whom there is a chance of recovering money. Harapan has prevented Singapore encroaching into Malaysian airspace and Malaysian waters.

The cost of living came down when the goods and services tax was abolished. It has increased after the sales and service tax was introduced. Harapan is studying how to tackle that problem now.

There is now freedom of expression enjoyed by the people. Umno and PAS have acted irresponsibly in raising communal and fanatical religious issues.

Najib has left massive problems which have to be resolved systematically. His trillion-ringgit debt is difficult and problematic, but these problems are not insurmountable.

Mano: Manogaran, quickly say a big sorry. No ifs and buts, or “if I have hurt anyone”, et cetera. Just say sorry that you have hurt people, and move on.

yoursay
mmanoharan
cameronhighlandspolls
Related Reports
Yoursay: ‘Miracle’ not needed in Cameron if Harapan does its job
2 years ago
Stop the drama and start solving Cameron's woes, PSM tells candidates
2 years ago
Manogaran drops 'kuih' analogy in Camerons; three arrested over royal insults
2 years ago
Umno hints it may field its candidate in Cameron Highlands
2 years ago