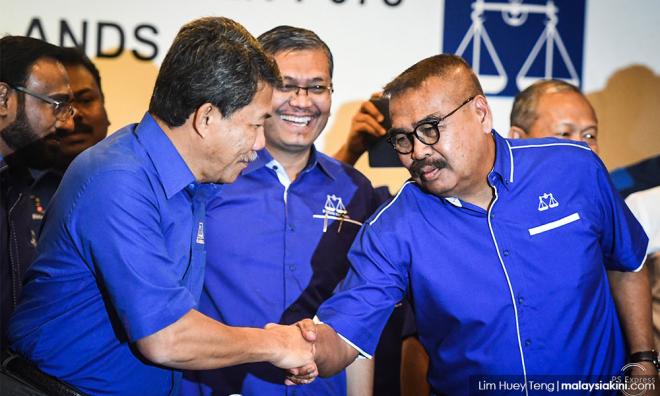 6th Generation Immigrant: BN’s candidate for the Cameron Highlands by-election Ramli Mohd Nor is an Orang Asli and was a senior police officer, so he should be a beacon of hope for his people.

The odds are that he will win with the majority of Orang Asli support.

At this point, we know little of Ramli, the candidate. However, we are all aware that the party he represents is an obvious problem to the nation.

Umno and BN are currently lost in a tunnel looking for that glimpse of light, so it is obvious Ramli is their scout, point man, spearhead and beachhead for revival.

The voters are in a dilemma. They are between the devil and the deep blue sea. So, who and what Ramli is made of will decide the results of this election. It is indeed a good move by Umno.

Appum: Although it is a strategic move to put an Orang Asli as the Umno candidate, we think he will not win voters.

Firstly, so what if Ramli was a former top police officer? It's not like the police force is so loved and respected by the people generally. It could even be a liability.

Secondly, Indians in Cameron Highlands are upset as Umno has usurped the power of their MIC party.

Thirdly, Umno as a party today is a sham brand and notorious for allegedly stealing from and cheating the people of their wealth for their own benefit.

Their top guns are now facing charges for massive corruption. Do you think people will not consider this? Can they still trust Umno?

Fourthly, the Orang Asli have been totally neglected by the Umno government for over 60 years. They have not progressed compared to the Umnoputras.

People will generally side with winners and those who wield power to carry out projects and assistance. So Pakatan Harapan today will be a better bet for the people of Cameron.

Fifthly, Umno-BN’s worst enemy today is the poor perception the rakyat have of the party. An image built from decades of mismanagement of all aspects of the country's resources, from human resources to wealth resources.

Cogito Ergo Sum: I am sure Harapan candidate M Manogaran’s “kuih index” tipped the balance in Ramli’s favour. DAP gave this fight away free with an own goal.

I am sure the BN candidate will use this “kuih index” in his campaigns and remind the people that sometimes it’s the person, and not the party, that is important.

It would be a terrible blow to DAP if it loses this seat, despite the flock of Harapan VIP visitors descending to help their flawed candidate.

Not even the presence of Prime Minister Dr Mahathir Mohamad can save the day for Manogaran.

YTMQ: Frankly, I hate BN. But, if I want to look at this positively, this would force Umno to begin to look after Orang Asli interests, something that Umno has been allergic to for a long time.

Lodestar: Ramli is a good candidate standing for the wrong party. BN had long neglected the plight of the Orang Asli, but they are now at such a low point that they are shamelessly calling on an Orang Asli for help.

DAP veteran Lim Kit Siang would have preferred an easy MIC member to do battle with, but it looks like this by-election will be a close contest.

Annonnymous 080: The reality is that the Camerons by-election was lost even before it started.

Given Harapan’s unfulfilled promises, and that this one seat won’t make any difference to political powers, outstation voters will teach Harapan the lesson of its life.

The abuse of government machinery tops it all, starting in Port Dickson; others more clandestine and sinister in the corridors of power. I am sure these may have reached your ears.

Lim, as a statesperson, you had an opportunity here to bring an 'outside the box' candidate best suited to the times, but while your opponents did the latter, you did not. Kudos to your opponents.

Worse, your candidate arrogantly does the unthinkable - abuses the local community. The perception today is that Harapan has, within seven months, become exactly those they replaced.

Kbe: After seven months of Harapan governance, I believe most Harapan supporters are getting somewhat disillusioned with the constant politicking among Harapan component parties, the unfulfilled promises in the Harapan election manifesto, non-performing ministers, et cetera.

Perhaps Harapan losing in Cameron Highlands is a good thing to remind Harapan to get its act together before it’s too late when it’s booted out in the 15th general election.

Raja Chulan: I think with this episode of Manogaran offending both the Malay and the Orang Asli communities, and the fact that BN is now fielding an Orang Asli, it would be appropriate for DAP and Harapan to have their strategy reworked in the light of the present situation.

It would be preferred if Manogaran is dropped and another new candidate, preferably a local Malay or Orang Asli candidate, be identified for the Cameron Highlands contest.

ChuenTick: Lim, perhaps you were really caught by surprise - yet the question is why did you folks not field an Orang Asli as well?

My friends and I feel that a defeat for DAP (and hence, Harapan) may not be a bad thing for the rakyat.

You folks are really taking the rakyat for granted, backpedalling on so many election promises. It's time Harapan is reminded it is the rakyat who put you folks in power and we can very well withhold our support come GE15.