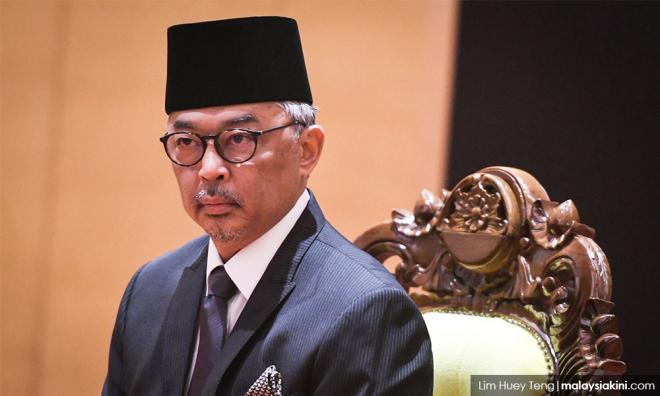 Pahang ruler Sultan Abdullah Ahmad Shah is leaving to the wisdom of the Council of Rulers which will be meeting on Jan 24 to announce the candidate selected as the 16th Yang di-Pertuan Agong in the interest of the nation.

Sultan Abdullah was commenting on the possibility of he himself being chosen as the next Yang di-Pertuan Agong after he was proclaimed as the sixth Sultan of Pahang effective yesterday.

“At this point, I cannot say more, if it is already there, then I will be there, let us look Yasin verse 82, then we will understand what I meant, " he said.

Sultan Abdullah, however, declined to comment further on the matter as he wanted to focus on the proclamation ceremony as the Sultan of Pahang on Jan 15.

“I will think about what I should do after the ceremony,” he said when met by reporters after morning prayers at Imam Syafie Mosque in Kota SAS in Kuantan today.

Meanwhile, Sultan Abdullah also shared his feelings after being informed on his appointment as the next sultan as announced by Tengku Muda Pahang Tengku Abdul Rahman Sultan Ahmad Shah yesterday.

“Felt mindful and humbled when receiving the call and proposal to make me as the sixth Sultan of Pahang... and there is a sad feeling, a feeling of gratitude for the trust of my father and siblings and the people of Pahang.

“This is also a big responsibility for me to the people and I will try to do my best for the people of Pahang no matter what," he said.

Sultan Abdullah also hoped to work with the government regardless of the state government or the federal government to assist the people who needed help.

Yesterday, Sultan Abdullah, 60, was proclaimed as the Sultan of Pahang to replace his father who is reported to be unwell.

The proposal to appoint Sultan Abdullah was submitted at the Pahang Royal Council after discussions were held among the family members and the proposal was unanimously agreed.