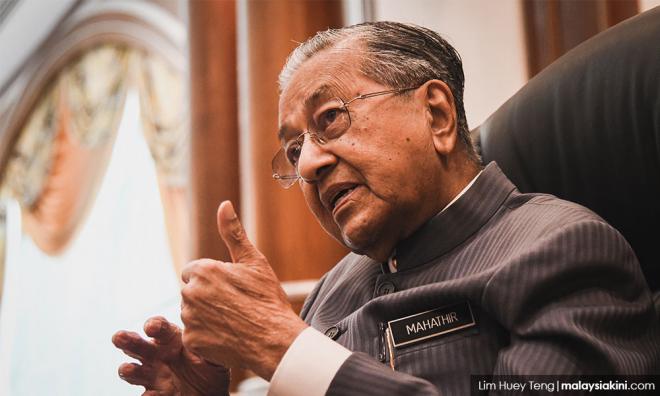 Yoursay: Mahathir, too, should stop playing the race card

YOURSAY | ‘Wealth distribution should not be used to justify racism.’

Mahathir: Wealth should be distributed equally among races

Clever Voter: Income inequality exists everywhere even in communist China. The good thing is that the country has been successful in removing absolute poverty. But it is a disgrace that there are still communities without access to basic water and electricity.

Making the redistribution of wealth among races through deliberate policy is counterproductive. After more than 50 years of doing so, Mahathir knows the limits and the failure of such policy.

Using possible social risks to justify is typical of politicians. This is unlikely as the government needs no reminder we have now a fairly large middle class, where many enjoy decent living standards.

What will happen is the resurgence of rent-seeking culture where only a few will benefit from the so-called wealth redistribution policy. Our prime minister is forewarned.

Abasir: I would like to see Mahathir and his ‘billionaire’ sons distribute their wealth to the poor of all races and set an example for all other billionaires in the country.

If one were to redistribute the mind-boggling wealth of all Umno/ex-Umno leaders, their friends, families and cronies, including those unimaginably wealthy chaps with exotic tastes and titles, wealth equality will no longer be a pipe dream bandied about by crafty politicians.

Anonymous #33227154: Wealth distribution should not be used as an excuse to justify racism.

People worked hard for their wealth. It's unfair to discriminate people based on race and blame certain races for being successful because they are more hard-working.

The Chinese and Indians worked hard to develop and build Malaysia together with the Malays. The government should help all Malaysians who are poor, regardless of their race.

It's unfair and illogical to have equal wealth distribution among races, we are not a communist state. Whoever who worked harder will be more wealthy than others.

Already special privileges are given to the Malays, but Prime Minister Dr Mahathir Mohamad should not penalise other races who work hard and become more successful.

He should stop playing the racist card again, it's so Umno.

David Dass: The poor of all races cannot wait for Mahathir to get things right. Billions of ringgit have been spent on affirmative action. Much of it has been wasted or squandered.

Look after the poor of all races. That must be a priority. The bumiputeras of Sabah and Sarawak have been neglected.

Do not punish the thrift and enterprise of some because of the failure of the government. After all, the successful pay more taxes. Tax revenues are dependent on successful businesses and hardworking individuals.

The truth is that all Malaysians have a stake in Malaysians of all races being successful. There are signs of Malay success everywhere. Except in the retail trade. But there are no obstacles to anyone of any race starting a business. However, there are high risks. Seven to eight businesses fail within two to three years of inception. A daunting statistic.

The government should offer incentives for multiracial ventures. That would facilitate the sharing of knowledge and expertise.

Not Convinced: Yes, society will be happier if the wealth disparity gap is not too wide, where we have millionaires living among beggars.

Anonymous 2301431436259502: Water finds its own level. You can divide the wealth equally now but after a while, it's back to rich and poor because some with make more out of it and other would squander it away.

Better to give the poor better education than money.

Blessed Malaysian: Indeed, eradicate poverty through education. Teach the poor to fish rather than give them the fish.

I know this because I came from a poor family whereby the children in my community did not further their education after Form 3.

But my parents, who were previously denied education in their younger days, strived to provide for us six siblings to continue until tertiary education.

We worked hard and studied hard because we understood that only through education, we could break the cycle of poverty. Now, all six of us siblings are graduates and doing well in life. Kudos to our parents.

Drngsc: Tun, you are wrong again. Opportunities for wealth must be equally distributed. All races must receive the same opportunity to succeed.

There are some who just refuse to succeed, refuse hard work, refuse opportunities. They just want crutches and handouts.

If they are poor, then they deserve it because there are others when opportunities present, they work hard, and so they succeed.

Malaysians must realise that you need a good education and to work hard to succeed. Not just on handouts and government help. Policies must be based on needs, not on race.

If some can succeed with same education and work hard, why can't the others?

Sunshine: Mahathir is saying the right things in historical perspective but much has gone astray to his stated aspirations of social equity and harmony, especially the last three decades. And why?

In the main, the challenges have been due to unsustainable institutional structures, weakening fundamentals of good governance, entrenching communalism in politics, increasing emphasis on race and religious identity in many aspects of national life.

Hence, the nation became increasingly challenged as its governing motivation began to default fostering an “enabling” socioeconomic and multicultural environment.

The blame must be assumed by all the races and all must unite as one nation to reclaim an honourable life with prerogatives and obligations.

Quigonbond: Both sides were harping on racial and religious supremacy just a few weeks ago, and now they are both trying to show each other how inclusive they are with one getting an Orang Asli to be candidate and the government talking about equality just because Cameron Highlands represents the most diverse demographics in the entire Malaysia.

My message for both political coalitions - platitudes are useless. Put your money where your mouths are. Don't win/lose the elections and go back to the old rhetoric.