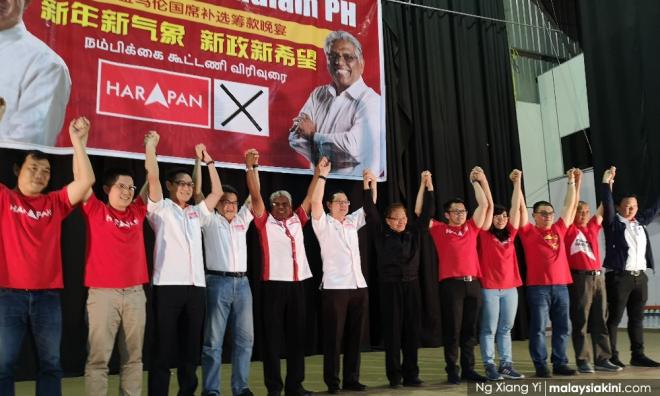 CAMERON POLLS DAY 8 | It is the eighth day of campaigning for the Cameron Highlands by-election.

11.59pm: This concludes our live coverage today of the Cameron Highlands by-election campaign. Follow our live blog again for the ninth day of campaigning tomorrow.

The dinner successfully raises RM10,180, with around 600 people attending the event.

7pm: Rosa Pasadena Hotel, Brinchang - PKR senator Bob Manolan Mohd has apologised again to the Orang Asli community regarding his remark that the tok batin (Orang Asli village chiefs) in Cameron Highlands could lose their positions and salaries if they do not back Pakatan Harapan in the coming by-election.

According to PKR Pahang chief Fuziah Salleh, Bob Manolan (photo) apologised to the tok batin during a dialogue held here this evening.

He had previously apologised over the incident in a statement issued on Monday.

She reiterates that no promises or projects were given during the dialogue session.

"We are there to listen their problems, we did not promise anything," she says.

She tells Malaysiakini that there was a meeting being organised by the government and the Department of Orang Asli Development (Jakoa) at the hotel, which the tok batin, along with Pakatan Harapan ministers and deputy ministers, had been invited to join.

“This is just a dialogue between the government and the Pahang Orang Asli community. We wanted to understand their problems, so we organised a meeting to listen to their voices,” she says.

Fuziah, who is a deputy minister in the prime minister's department, also clarifies that this is not a campaign event for Pakatan Harapan, and that the Harapan candidate for the Cameron Highlands by-election had not been allowed to join the dialogue.

Meanwhile, she adds that Finance Minister Lim Guan Eng might join the dialogue as well. However, Harapan leaders who are not in the government are not allowed to participate in the event.

4pm: Petaling Jaya - MCA vice-president Ti Lian Ker questions if there will be a repeat of the voting trend in GE14, which he claims is a contributing factor to growing racial divide.

"There’s already a racial divide reflecting the national political climate during the PRU14 whereby by and large the Chinese, Indians and Christians voted for a change or ubah.

"Will this continue or will the voters in Cameron Highlands stay above the racial divide and put a stop to political racial polarisation that’s more and more obvious of late?," says Ti in a statement, noting that observers are predicting that the votes will remain along racial lines.

He further claims that after a large number of non-Malays had voted against BN in GE14, it is now Harapan's turn to adopt a similar race-based rhetorics on issues including wealth distribution and management of the economy.

"These are the same old political narratives about wealth must be given to the Malays in proportional to their population ratio.

"Where’s the meritocracy that DAP promised?," he asks.

"There’s nothing new in the by-election of Cameron Highlands .

"It’s the same old politics with a difference i.e. BN is in the opposition and under siege by a strong government machinery under Pakatan," he further argues.

Ti as such says he believes that independent candidate Wong Seng Yee may get a bigger share of the protest votes from the Chinese community who he claims are tired of "DAP's political dramas".

3pm: Kampung Belau, Pos Senderut - Temperatures are scorching and but more than 300 Orang Asli villagers gather under white tents to hear what former prime minister Najib Abdul Razak has to tell them.

The crowd, many donning BN t-shirts, then queue up for free beehoon, currypuffs and cordial prepared by members of Felda Tersang Wanita Umno.

After sharing a bite with tok batin (village chief), Najib leaves but not before he swamped with requests for selfies.

Anwar: Gov't must have clear plans to address Orang Asli's issues after by-election

1.30pm: Lembah Pantai, Kuala Lumpur - The government must have a clear plan to redress grieviences of the Orang Asli community but these should only be announced after the Cameron Highlands by-election is over, says PKR president Anwar Ibrahim.

"The living conditions of the Orang Asli generally are really poor. They have been neglected and marginalised, and I think the government must have a clear plan which of course must include some of the grieviences they raise.

"We should not use the campaign to announce any specific programme, but it must be done soon after the elections," he says.

“We have received information from reliable sources that they (Harapan) are trying to ensure that about 2,000 Orang Asli voters do not come out to vote by 'buying' their identification cards.

“Without their ICs they can’t vote,” he tells the media after a BN campaign event.

Lokman further alleges that Harapan is doing this in “four to five” Orang Asli settlements but refuses to divulge more details.

“When we put Ramli Mohd Nor as our candidate it became clear that this ruined their chances to draw the Orang Asli vote,” he adds.

“He (Wan Rosdy) said the parking fees are only for tourist areas but clearly that is not true.

“As you can see, we are standing in front of a residential area now and the parking here have to pay,” Manogaran says to reporters today.

Besides, he adds, Tanah Rata and Brinchang are two of the most populated areas in Cameron Highlands, and are not just for tourists.

“I understand the local council has to earn as well, but not at the expense of the locals here,” he added.

Meanwhile, Kuantan MP Fuziah Salleh has accused the BN-led Pahang state government of mobilising its machinery to campaign in the Felda areas of Sungai Koyan.

She said the agriculture event held in Felda over this weekend was organised by the state department without the knowledge of the Agriculture Ministry.

“BN never learns ... they should not be using government machinery like this,” she said.

“The future of Muslims and the country depends on this cooperation between Umno and PAS,” he tells a crowd of mostly BN supporters in this PAS stronghold.

PAS is sitting out of the Cameron Highlands by-election but its top leaders are all canvassing for BN.

“If Malays do not unite, others benefit,” he says.

Najib later denies a claim by Australian daily The Australian that the East Coast Railway Line was inflated by RM30 billion to pay for 1MDB’s debts.

“It is not true, we have already come out with a statement,” he says briefly.

Along with Pahang Menteri Besar Wan Rosdy Wan Ismail, he participates in a “coconut bowling” competition.

Najib tosses the coconut and lands a full strike, sending all plastic water bottles crashing to the ground.

The emcee lauds this, saying it is a good sign that BN will defeat Pakatan Harapan in the Cameron Highlands by-election.

Wan Rosdy, however, is less successful after two tries.