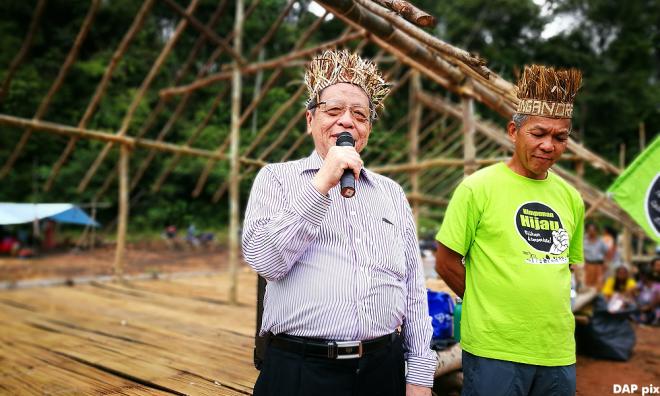 Let this be a good year for the Orang Asli community

MP SPEAKS | This year should be a good one for Orang Asli in Malaysia as it opened with another New Malaysia landmark when the attorney-general Tommy Thomas made history with the federal government acting on behalf of the Temiar Orang Asli to file a civil suit against the Kelantan government and its agencies to prevent the destruction of native land for commercial profit.

Thomas had filed the suit at the High Court in Kota Bharu to seek legal recognition of the Temiar Orang Asli’s native land rights in Pos Simpor and injunctions to restrain private parties from encroaching upon it.

He said the Pakatan Harapan cabinet had resolved on the legal proceedings to reflect the government’s commitment to the Orang Asli as well as honouring one of the promises in the Harapan manifesto.

The beneficiaries of this suit are the Orang Asli, and the litigation will be cost-free to them.

This is a most welcome development, coming three days after the Attorney-General’s Chambers (AGC) had agreed to waive the legal costs imposed by the High Court in Temerloh against the Orang Asli from Pos Lanai for withdrawing their suit pertaining to the Telom Dam project, acceding to the appeal of the Orang Asli activists that they could not afford to pay the amount.

In responding to the request, the AGC had also called on Tenaga Nasional Bhd (TNB), which was also a defendant in the case, to "take the same position" in agreeing to waive the costs.

The court had previously ordered the activists to pay the sum of RM9,000 after they withdrew their suit against TNB, the Orang Asli Development Department (Jakoa), as well as the Pahang and federal governments in relation to the Telom Dam project.

The Orang Asli filed an injunction in 2015 to prevent TNB from starting work on the Telom Dam.

They also challenged the acquisition of the land for the dam project, arguing that it was unlawful.

They were granted an injunction by the High Court in Kuala Lumpur four months later.

However, TNB managed to obtain another injunction from the High Court in Temerloh in 2016, this time to bar the Orang Asli from entering the land in question.

What is left to be done now is for TNB to officially announce that it will not proceed with the Telom Dam project.

Six decades after Merdeka, the long-standing fight for justice of the Orang Asli in the country is beginning to bear fruit with the peaceful and democratic transition of power from Umno/Barisan Nasional to Pakatan Harapan.

This is one reason why there is a Cameron Highlands by-election on Jan 26 as there were 12 witnesses who testified about the corrupt electoral practices of money politics and vote-buying in the 14th general election campaign in Cameron Highlands.

The case involved both MIC vice-president C Sivarraajh for the parliamentary seat and the present Pahang Mentri Besar Wan Rosdy Wan Ismail in the Jelai state assembly seat, with the Election Court declaring the Cameron Highlands election last May null and avoid and the holding of the current by-election.

Without these 11 Orang Asli witnesses, who are undoubtedly the national heroes of truth and integrity, there would be no Cameron Highlands by-election, which must go down in Malaysian history as a landmark in the national objective to transform Malaysia from a global kleptocracy under former prime minister Najib Abdul Razak into a leading nation of integrity in the world under Prime Minister Dr Mahathir Mohamad.

They recounted how frightened and fearful they were when they went to the High Court in Kuala Lumpur last year and faced the sophisticated lawyers during cross-examination.

But although they were afraid to come out from the interior Orang Asli kampung to the imposing Kuala Lumpur High Court and faced interrogation by the lawyers of the MIC vice-president, they just told the truth of what happened during the 14th general election.

But Wan Rosdy, who is the Pahang state assemblyperson for Jelai, one of the two state assembly seats in the Cameron Highlands parliamentary seat, dared not go to the Election Court to testify although the election petition proceedings were adjourned three times for him to do so.

Election Judge Azizah Nawawi finally held that corrupt practices had been proven to have been committed with the knowledge and consent of Sivarraajh, the Cameron Highlands MP, and Wan Rosdy - namely giving money to voters to induce them to vote for BN.

She said: “I am of the considered opinion that the petitioner has established beyond reasonable doubt that bribery was proven, in that money was given to voters either directly by the respondent (Sivarraajh) or indirectly through Wan Rosdy or Achom (an Orang Asli who acted as an agent for Wan Rosdy) and that the money was given to the voters to induce them to vote (for BN).”

What is most intriguing is that although Sivarraajh announced immediately after the Election Court verdict on Nov 30 that he would appeal, he failed to do so, and it is open knowledge that Sivarraajh was not allowed by Pahang Umno to submit any such appeal.

The present BN candidate Ramli Mohd Nor rose to the rank of a state commercial crime director.

Could he investigate to find out why Wan Rosdy dared not go to the Kuala Lumpur Election Court to testify in the election petition like the 11 Orang Asli from Cameron Highlands, and whether Umno Pahang had acted fairly and correctly in prohibiting Sivarraajh from appealing the Election Court's decision?

The Cameron Highlands by-election is a very difficult and uphill battle for Harapan to win. Even in the “miracle” of the 14th general election result on May 9, 2018, which ousted Najib Abdul Razak and Umno/BN from Putrajaya, Harapan still could not win the Cameron Highlands parliamentary constituency.

Will this happen in the Cameron Highlands by-election on Jan 26?

The year 2019 should also be a good year for Orang Asli’s long-standing fight for justice, for there is another good news for Orang Asli recently with the three-member Court of Appeal bench deciding two days ago to uphold a Johor High Court decision ordering a father-and-son lawyer team to return part of RM38.5 million in compensation given by the Johor government to Orang Asli villagers for construction of a dam on their land.

The appellate court also upheld the finding that S Kanawagi and Dinesh Kanawagi were liable for breach of their respective fiduciary and contractual duties and conspiring to defraud the Jakun Orang Asli community, namely the Jakun tribe in the Linggui Valley in Johor.

This is because they had used part of the sum, said to be RM7 million, to purchase 27 units of condominiums in Kuala Lumpur.

The Orang Asli land was sold to Singapore for it to build a water catchment facility to supply water to the republic.

The appellate court held both lawyers liable to the breach of fiduciary duty as there were misuse, mismanagement and misappropriation of trust funds.

LIM KIT SIANG, a veteran of the DAP, is the MP for Iskandar Puteri.