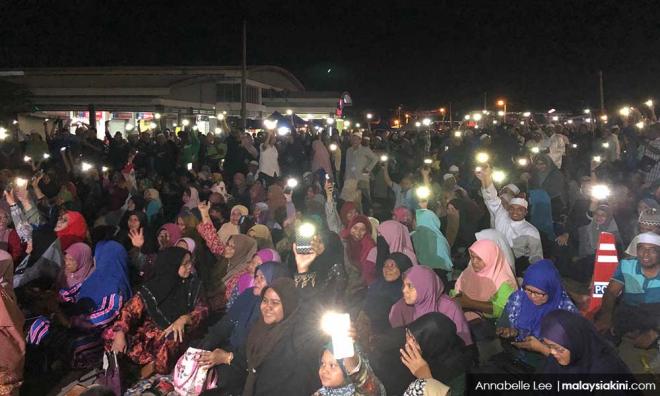 11.59pm: This concludes our live coverage today of the Cameron Highlands by-election campaign. Follow our live blog again for the tenth day of campaigning tomorrow.

The emcee estimates the crowd to be at least 5,000.

After an introductory speech by Pahang Menteri Besar Wan Rosdy Wan Ismail, Mohamad tells the audience to translate their dissatisfaction of the Pakatan Harapan government by voting for BN candidate Ramli Mohd Nor.

Hadi’s speech is the highlight of the night.

The Marang MP rallies the crowd, which includes many PAS supporters, to set aside their differences with other Muslims and unite to elect a Muslim leader.

Just across the road less than a minute walk away, Pakatan Harapan has set up a large screen and stage for two scions of former PAS presidents.

Anticipating a large crowd, durian seller Hisham Ghazali has set up a second stall near the BN-PAS stage.

“I usually have only one shop, but tonight I opened a second one,” he tells Malaysiakini.

If Harapan used gov't vehicle, we will stop - Mano

6:30pm: Felda Sungai Koyan 1, Jelai - In light of allegations that a Pakatan Harapan deputy minister has been campaigning using a government vehicle, the coalition’s candidate M Manogaran insists he is against such practices.

“If it was proven (that the vehicle was used), we will stop.

“Sometimes this kind of things may happen [...] If we have done wrong we will correct it,” he tells the media after campaigning here.

He adds that he is still determining facts of the case.

Former Prime Minister Najib Abdul Razak earlier posted an image of a black four-wheel drive vehicle with "PHD Raub" written across the back and with the Harapan flag on its sides.

The Pahang government has since confirmed that it is a state Forestry Department vehicle that was loaned for “official use” by a deputy minister.

He is particularly enraged over Najib saying that Felda settlers lived a better life under BN as they were given bonuses and high salaries.

“What do I worry? It was our tax money (that he distributed), tell him that,” the chef tells the media after campaigning for Pakatan Harapan here.

He adds that settlers owe nothing to Najib’s administration as they worked on their Felda land themselves.

5.45pm: Pakatan Harapan announces that there will be a mega ceramah in Cameron Highlands on Wednesday (Jan 23), featuring top leaders from the ruling coalition.

"We have confirmed the attendance and speech from PKR president Anwar Ibrahim and DAP secretary-general Lim Guan Eng that night.

"Aside from those ceramah, we are also going to have speeches from national Harapan leaders, Lim Kit Siang and Teo Nie Ching," said DAP Youth vice-chief Jenny Choy Tsi Jen in a statement today.

The ceramah, which will be held at the parking lot of the Cameron Highlands local council starting 7pm, is on the same night as the candidates' debate, which is organised by electoral watchdog Bersih.

All the candidates except BN's Ramli Mohd Nor will participate in the debate, which will be telecast live at 9pm from the Heritage Hotel in Tanah Rata.

“This is a recipe from Italy,” he says while sharing his experience growing up in Felda Sungai Koyan 1.

About 60 people, mainly women, gather to watch the demonstration.

1pm: Taking to Facebook, former prime minister Najib Abdul Razak mocks Pakatan Harapan over the alleged use of a government vehicle on the campaign trail.

Najib uploads a photograph of a four-wheel drive vehicle with "PHD Raub" written across the back, and with the Harapan logo on its sides.

He also includes a screenshot of the Election Commission's Election Code of Ethics, pointing out that government vehicles cannot be used for campaign purposes.

"Does this vehicle belong to the Forestry Department?

"What model is this? It looks OK, I might test drive one myself. Driving a 4x4 feels a bit different, right?" reads his posting, which has garnered over a thousand likes in under three hours.

KJ tells Harapan not to leave Cameron behind

Before having lunch with the Orang Asli community, the former Umno Youth chief says that in New Malaysia, Pakatan Harapan must ensure that those who do not vote for the ruling coalition are not punished.

“If Cameron Highlands voters still choose BN, then Harapan must show that this is New Malaysia, and development will take place according to the community's needs."

Khairy also expressed his belief that development would not be stalled as Pahang is under BN rule, with the state government able to sort out constituents' land woes.

When asked on the collaboration between Umno and PAS for the polls, meanwhile, Khairy says that public acceptance would not be an issue.

The report was lodged over a Jan 18 speech by Lokman, in which he alleged that Harapan was aiming to prevent 2,000 Orang Asli voters from casting their ballots in the by-election.

"We in Harapan take this allegation seriously because we would in no way encourage such practices.

"This allegation will also tarnish Harapan's image and is slanderous.

"I want the police and the Election Commission to take the appropriate steps to investigate this allegation, and take action against Lokman," his report read.

11.44am: More party leaders are descending on Cameron Highlands today, including Khairy Jamaluddin, who will be in Tanah Rata and PAS president Abdul Hadi Awang, who will be joining BN in a ceramah in Sungai Koyan tonight.

The ceramah will also feature top BN leaders such as Mohamad Hasan, Wan Rosdy Wan Ismail and the candidate himself Ramli Mohd Nor.

10.40am: Pasar Pagi Tanah Rata - BN vote canvassers are doing their rounds at the local morning market here when they bump into DAP’s candidate M Manogaran (photo) and his team.

The two groups are cordial and friendly to each other, stopping to take pictures together.

One of the BN canvassers jokingly asks Manogaran where he is voting.

One of BN's main campaign message has been that their candidate Ramli Mohd Nor is a local to Cameron Highlands.