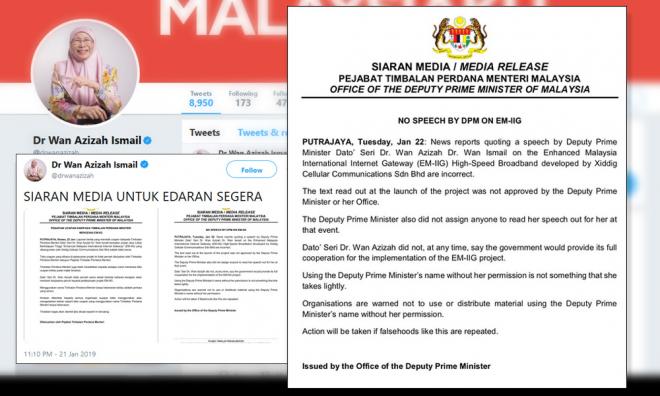 "The text read out at the launch of the project was not approved by the deputy prime minister or her office.

"The deputy prime minister also did not assign anyone to read her speech out for her at the event," it said.

The speech was read out by Dewan Rakyat deputy speaker Rashid Hasnon, who is also PKR's Batu Pahat MP, in Kuala Lumpur, today.

The speech, purportedly read out on behalf of Wan Azizah, had said the government would provide full cooperation on the implementation of the EM-IIG project.

The speech was reported by national news agency Bernama, which has since retracted the story.

"Wan Azizah did not, at any time, say the government would provide its full cooperation for the implementation of the EM-IIG project.

"Using the deputy prime minister's name without her permission is not something she takes lightly.

"Organisations are warned not to use or distribute material using the deputy prime minister's name without her permission," it said.

Wan Azizah's office said action would be taken if such incidents are repeated.

The EM-IIG project, developed by Xiddig Cellular Communications Sdn Bhd, is intended to provide "the fastest internet access speed with the 5G platform" through the installation of the world's largest optical fibre involving 110,000km line.