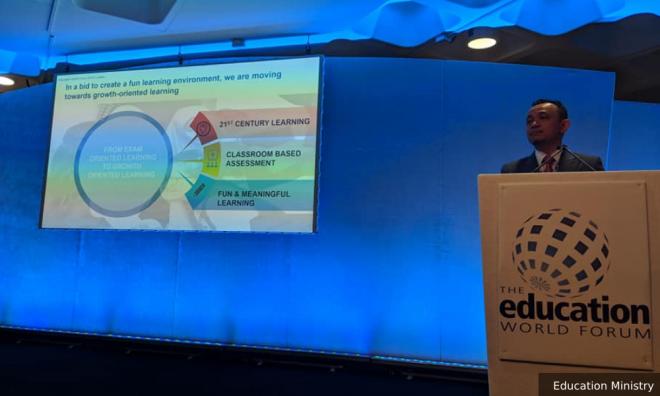 Malaysia aspires to strengthen the education system by emphasising more humanistic and value-driven education with the internalisation of the culture of happiness, love and mutual respect, said Education Minister Maszlee Malik.

He said the three cultures would hopefully create a fun, safe and positive learning environment where the social and emotional well-being of the school children are prioritised.

“Something like social and emotional learning cannot be the responsibility of schools and teachers alone. We are working with parents and other non-governmental organisations (NGOs) in this effort,” he said in his speech during the Education World Forum 2019 in London. His speech was made available to the local media today.

Speaking on the topic of ‘Social and Emotional Learning and New Developments in Pedagogies', Maszlee was among the 62 speakers from several countries at the three-day forum, starting yesterday.

“Currently, more than 90 percent of Malaysian schools have parents involved in the majority of school events. Moving forward, we plan to make these contact points more meaningful,” he said.

He also stressed the need for partnership with external stakeholders like NGOs and the private sector which had been beneficial to the ministry's effort.

Maszlee also said he believed the adoption of digital technology in education had accelerated the changes in behaviour and values of students, which in turn impacted the way they learned, as well as their capacity to learn.

In the future, Maszlee said, education requires key industry players to be more collaborative and creative, and that it was important for educators to prioritize social and emotional learning among school children.